Whose footsteps are these?, a preface to Cecilia Vicuña
by Jenni Crain
On September 28, 2020, artist and Wattis Curatorial Fellow Jenni Crain led a public reading group commencing Wattis’ year-long research season dedicated to thinking about the contemporary climate through the lens of Cecilia Vicuña's work.

She began the discussion with the following introduction. 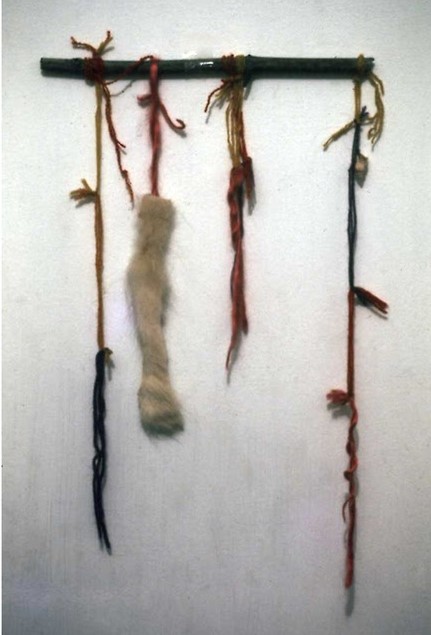 Quipus are ancient devices used for writing, recording, measuring, and remembering, which were made of knotted strings that could be wound, bound, and unbound at different junctures in order to collect evolving sets of data. They were used by the ancient peoples of the Andes as ways to transmit numerical and statistical information and also to record stories, poems and genealogies. Less than 1,000 quipus exist today due to the deterioration of their natural material, but also due to intentional destruction by Spanish colonizers during the sixteenth century. Quipus were forms of language in their own right, wherein meaning was woven into textile and knotted cords. It was a language which the Spanish themselves could not understand, and thus they sought to eradicate the quipus when instating their own position of power. 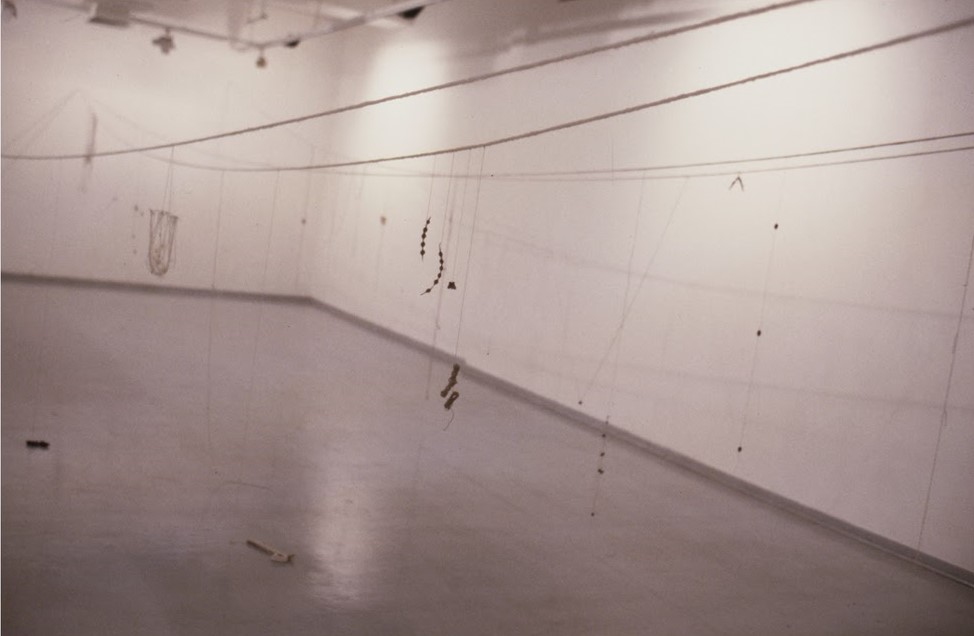 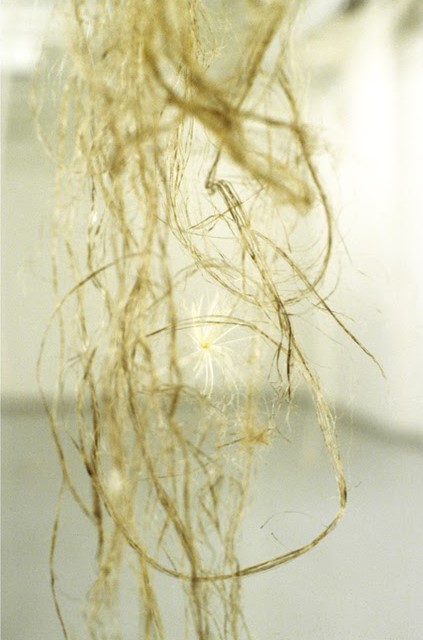 Vicuña began to make her own versions of quipus in the 1960s as a recurring part of her practice. She has written, “Five thousand years ago the Andes peoples created the quipu, a poem in space, a way to remember, involving the body and the cosmos at once. A tactile, spatial metaphor for the union of all. The quipu were banished after the Conquest. Quipus were burnt, but the vision of interconnectivity, a poetic resistance endures underground.” 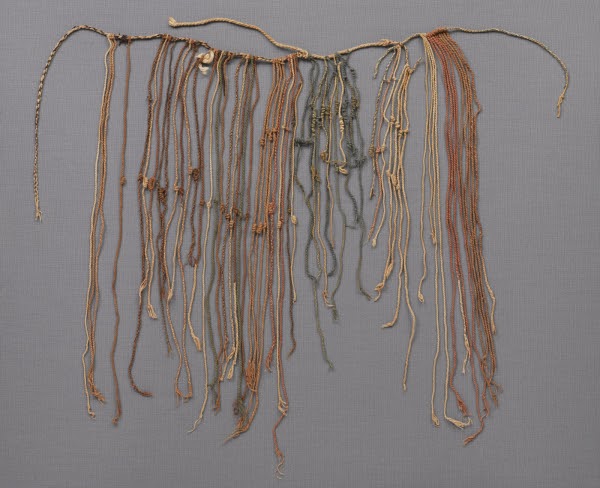 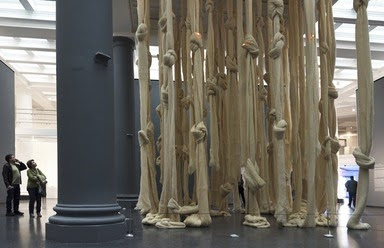 Vicuña’s 2018 installation at the Brooklyn Museum in New York paired ancient quipus from the museum’s collection with an environmental quipu commissioned on the occasion of the exhibition. The museum’s statement reads, “Together, these quipus of the past and present explore the nature of language and memory, the resilience of native people in the face of colonial repression, and Vicuna’s own experiences living in exile from her native Chile.”

Vicuña has written about the erasure of her own indigenous history – its suppression by her grandmother and mother, who did not publicly share this aspect of their identities. Her quipus seek to reactivate the spirit of those ancient cultures, which live on through her, her work, and that of her peoples. 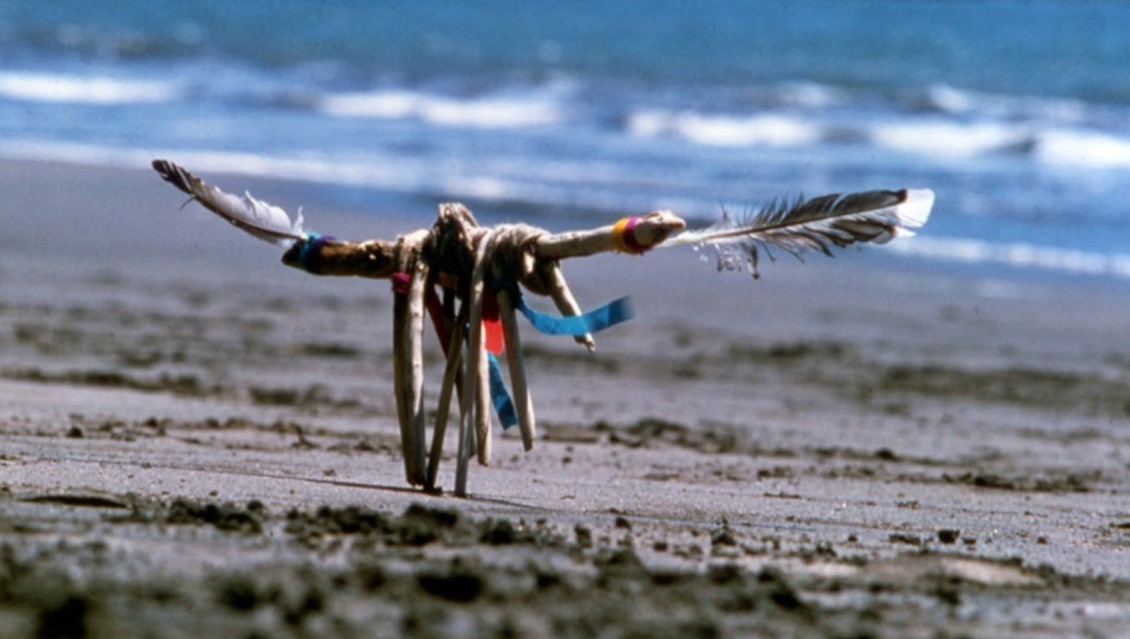 Crain read an excerpt from a section dedicated to Vicuña’s precarious works (1966-2015) included in the 2018 publication new and selected poems of cecilia vicuña published by Kelsey Street Press.

“Lo precario (the precarious) is a way of being in the land, a series of gestures and site-specific performance installations created collaboratively with the elements. Works for the sea or street traffic to erase.
To name a work for its dissolution responds to ancient vision: the path of the planets, the sun, and the moon are named for their disappearance: ecliptic.
The precarious are metaphors in space. They create a history ‘written’ in the memory of the land and the bodies of passersby.
The history of the north excludes that of the south, and the south excludes itself, embracing only the north’s reflections.
We are the basuritas, throwaways of this world.” (1)

Vicuña considers her precarios as part of nature. They are ephemeral, transitory and prone to deterioration. They are often made from foraged materials - be they natural or man-made detritus - and are considered complete in their physical erosion or in their potential to decay. The pictured work from 1967 was completed when swept out to sea, and thus illustrates Vicuña’s continuous return to a reciprocity with the Earth. The precarios work through an ongoing engagement with the idea of disappearance, and specifically with the disappearance of Indigenous cultures. 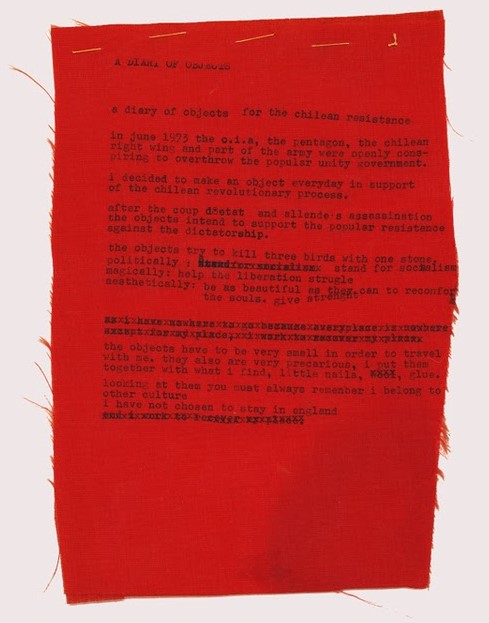 In June of 1973, when the Chilean right wing and the army were conspiring to overthrow the Popular Unity government of Salvador Allende, Vicuña began to make an object everyday for one year in support of the revolution. Each object or journal entry was constructed from debris from the streets of London. As this red silk work textually states, Vicuna’s objects intended to support the popular resistance against the dictatorship. 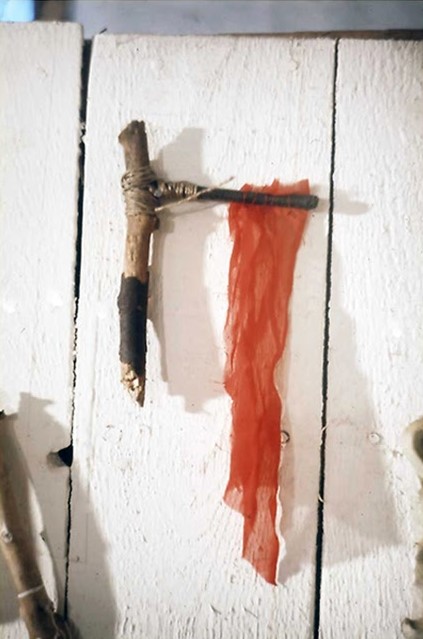 The precarios are full of pain. They seek to remember, honor, and invoke that which has been disappeared, destroyed, and erased, while they also illuminate the nature of our own existential condition - to return to the Earth. They mark a life without the promise of stability, which can either incite our anxieties or remind us of what it means to be present. Precarity is ultimately the nature of life, yet it is often resisted, in forceful attempts to stabilize and control.

In conversations and interviews, Vicuña often refers to Mummy’s Skirt. It is a precario from 1987, which is made of one of Cecilia’s own, aged pieces of clothing. Years after making the work, Vicuna visited a gallery in New York specializing in pre-Columbian art and saw a precarious object quite similar to her own; however, this relic was recovered from a tomb and was over 2000 years old. It is not unlikely that Vicuña may relate such an experience to being one full of the “life force” - an energy that is latent in all of existence - connecting bodies, memories, customs, and experiences through millenia. The histories of her ancestors are deep seeded within her,a part of her own fiber, as ours are within us. 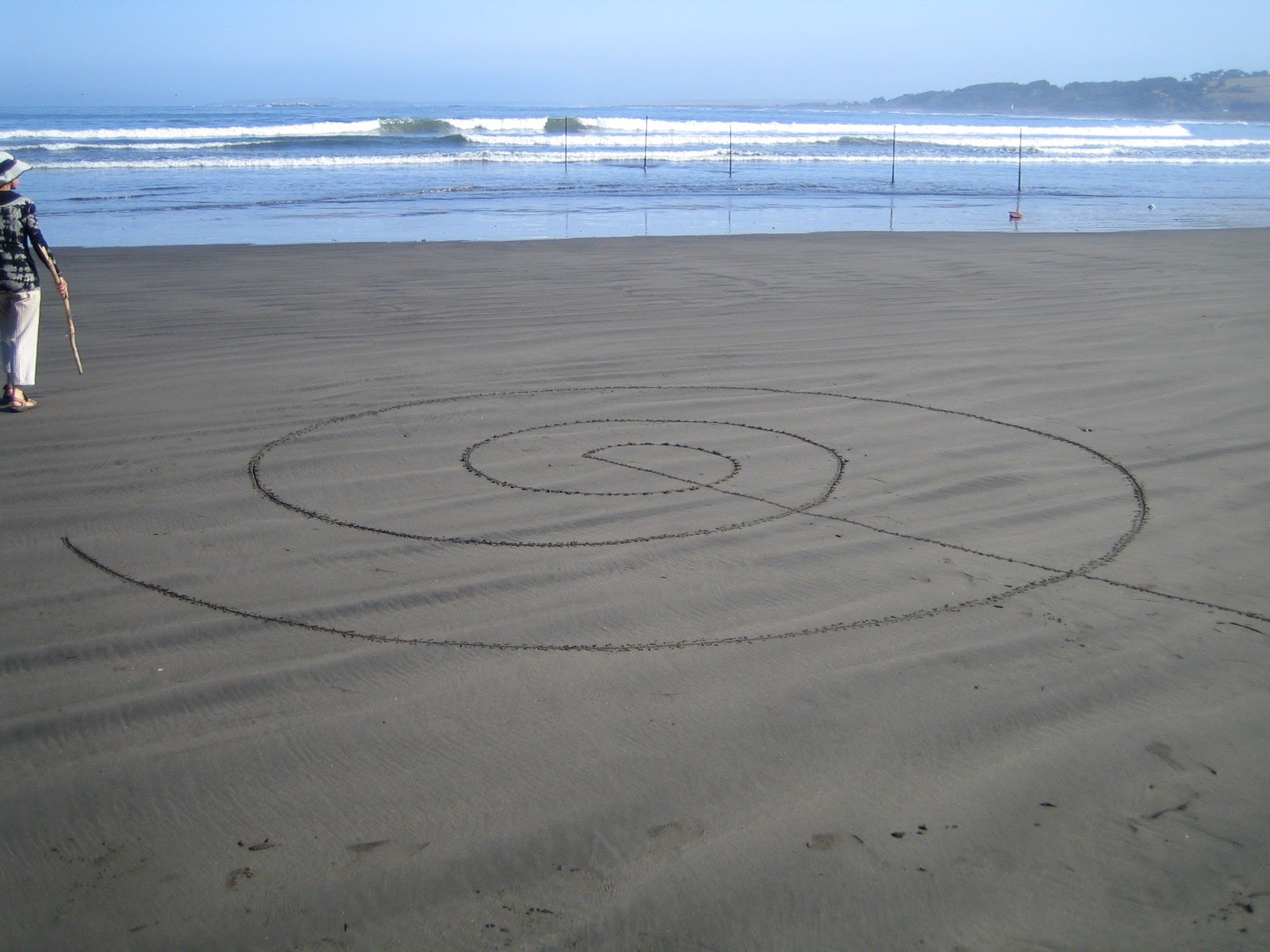 Vicuña’s transformative acts or metaphors in space take the forms of poems, films, performances, songs, sculpture or collaborations with nature. The following images briefly contextualize a few examples. These metaphors in space exist within liminal experience. They confront structures of colonial and capitalist imposition, address environmental crises, and draw attention to the displaced, the marginalized, and the vanished.

Cecilia Vicuña has written, “Espiral y Mar / Spiral and Sea was created at the junction of two waters, the Aconcagua River and the Pacific Ocean, the sea completes the work, erasing it.” 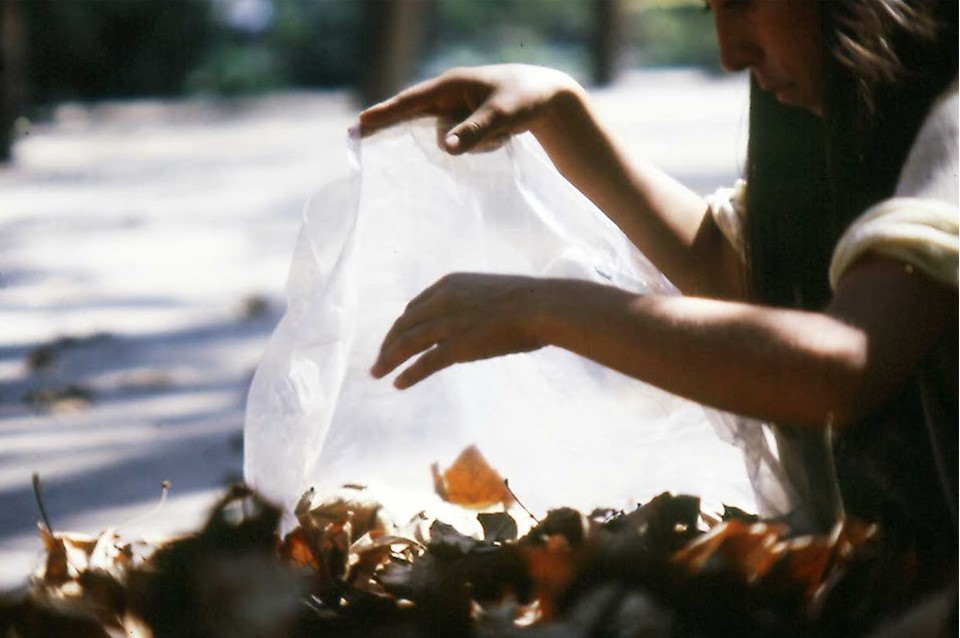 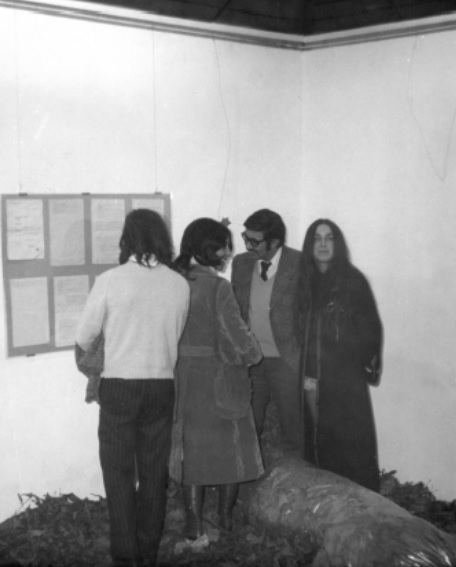 In June of 1971, Cecilia filled a gallery of the National Museum of
Fine Arts with autumn leaves, and dedicated the work to the construction of socialism. As Miguel López wrote in the essay discussed by the reading group, “The work was not something to see, but to feel under feet, to smell, to hear the sound of crunching as one walked in the leaves.” Vicuna wrote that the work was to be appreciated internally, behind the eyes, and thus experienced inside the body. 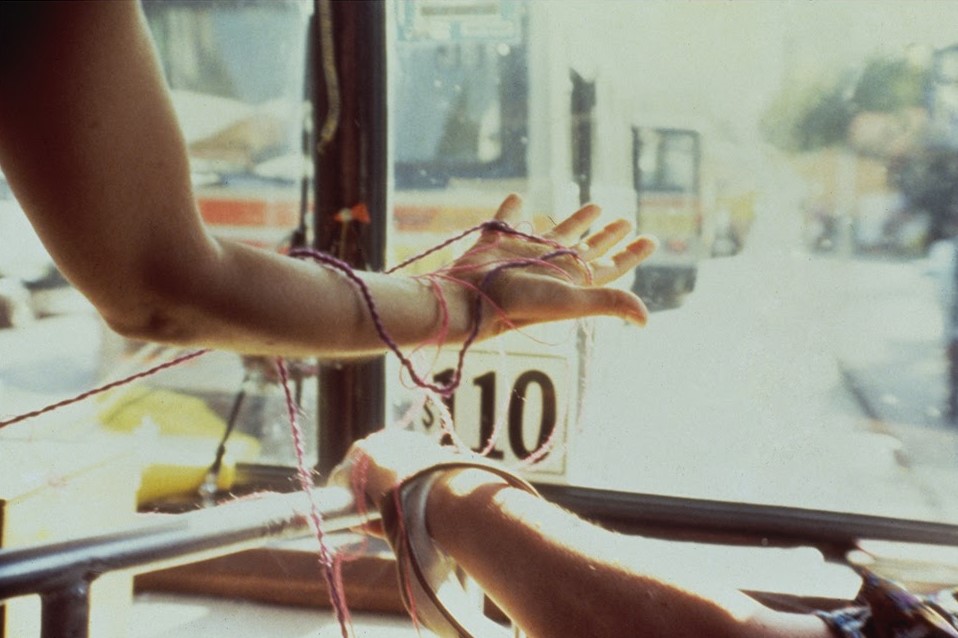 Of her Guante performances, Cecilia has written, “During a bus ride I would raise a hand gloved in a glove begloved. The glove is not a glove, but a primordial mythic being. (The bus, too, moves in primordial mythic time.) When a girl is born, her mother puts a spider in her hand, to teach her how to weave. Thread is the memory of the journey unraveling.”

How might we activate, acknowledge, and either resurrect or attempt to reckon with these histories?