Where have they gone?, a series of ideas from the Cecilia Vicuña Reading Group
by Jenni Crain with Theo Lau and Selam Bekele

In this conversation, participants discussed a selection of Vicuña's poetry; in relation to an essay, "Cecilia Vicuña: A Retrospective For Eyes That Do Not See” (2019), by writer and curator Miguel A. López; as well as, an essay, “A Conquest Foretold” (1998), by Ranajit Guha, an historian of the Indian subcontinent and leading figure in postcolonial and subaltern studies. The reading group thought through Vicuña’s vast and diverse body of work - particularly drawing from the symbolic resonance and motivations in her Quipus, Precarios, and Metaphors in Space, while cross-reading their concepts through the themes addressed in the two focal essays. The conversation considered the ways in which courses and constructions of time are forms of measure and mark making, of control and erasure, but also threads of continuity coalescing bodies, beliefs, and landscapes.

In the Andes they say:
"The time has come to renew the past.
The future is behind: it has not yet arrived."

If the memory of an event is a "trace" in the land, the actions that took place long ago are "etched" there, but "long ago" may become tomorrow anytime!

Ranajit Guha’s essay, ‘A Conquest Foretold,’ brings into question the selective constructs of imperialist historiography. In his writings at large, as in this essay, Guha encourages the consideration and an embrace of a more extensive understanding of history, one which generates space for pasts and peoples whose histories have been eliminated, while also emphasizing the historical nature of everyday life.

How can we rewrite and re-member the strategically disappeared into a more truthful, resounding understanding of history?

In the opening section, “A Small Victory Called Conquest,” Guha writes of the Battle of Plassey as the demonstrative moment conceived to signify the British conquest of the continent of India. He writes, “The context of pain that niggles us, shadows every reference to us as the colonized or once colonized, is part of a legacy that dates back to early years of British rule in South Asia and was passed on through successive generations… The turmoil and sensitivities of that difficult transition not only added to the intensity of the pain but taught us at the same time to contextualize it in history.” (1)

While one battle does not eradicate the cultural complexities of successive generations, it is implemented to name and issue datability as a structure relative to conquest. When is made relative to before and after.

For the conqueror, the approach to power is a right of arms, of domination, of violence, which stifles - as opposed to negotiation, dominion, alliance, or compact, which enables a mutuality and thus a futurity for the advance of both peoples, of peoples together.

What is power? What is dominion? Where can we see openings for the productive possibilities of both?

In her work and in the presence that surrounds her work, Vicuña creates a power that aims to decentralize hierarchy. Not all power looks the same. Not all power must seek to oppress. Power can be quiet and power can be passed on. It can be an offering, like Vicuña’s own to the ocean.

Rather than demarcating a specific moment to symbolize transition or imposition of power, why not “unpick” the fortified moments, giving power to the moments that dissolve into the fabric of our daily lives?

While Guha suggests “The Other Story,” as the final section of his essay is titled (2), Vicuña’s work extends the proposition of “A Story to Add to.” In Vicuña’s work, time remains malleable. Change is embraced. By both preserving and reanimating the disappeared, while also acknowledging the nature of disappearance itself, Vicuña’s work dissuades the comprehension of a singular narrative. As both Guha and Vicuña would recognize, one date or one narrative cannot quantify trauma as a single act. There is an ongoing performance, which moves in multiple directions, and our temporal understanding must be renegotiated, redistributed.

Utopia is not a “no place.” It is a No! Place. A refusal of a definition of place. No! may be an anticanonical exploration of the unpreserved, of bodily joy, of pleasure, of embodied experience. 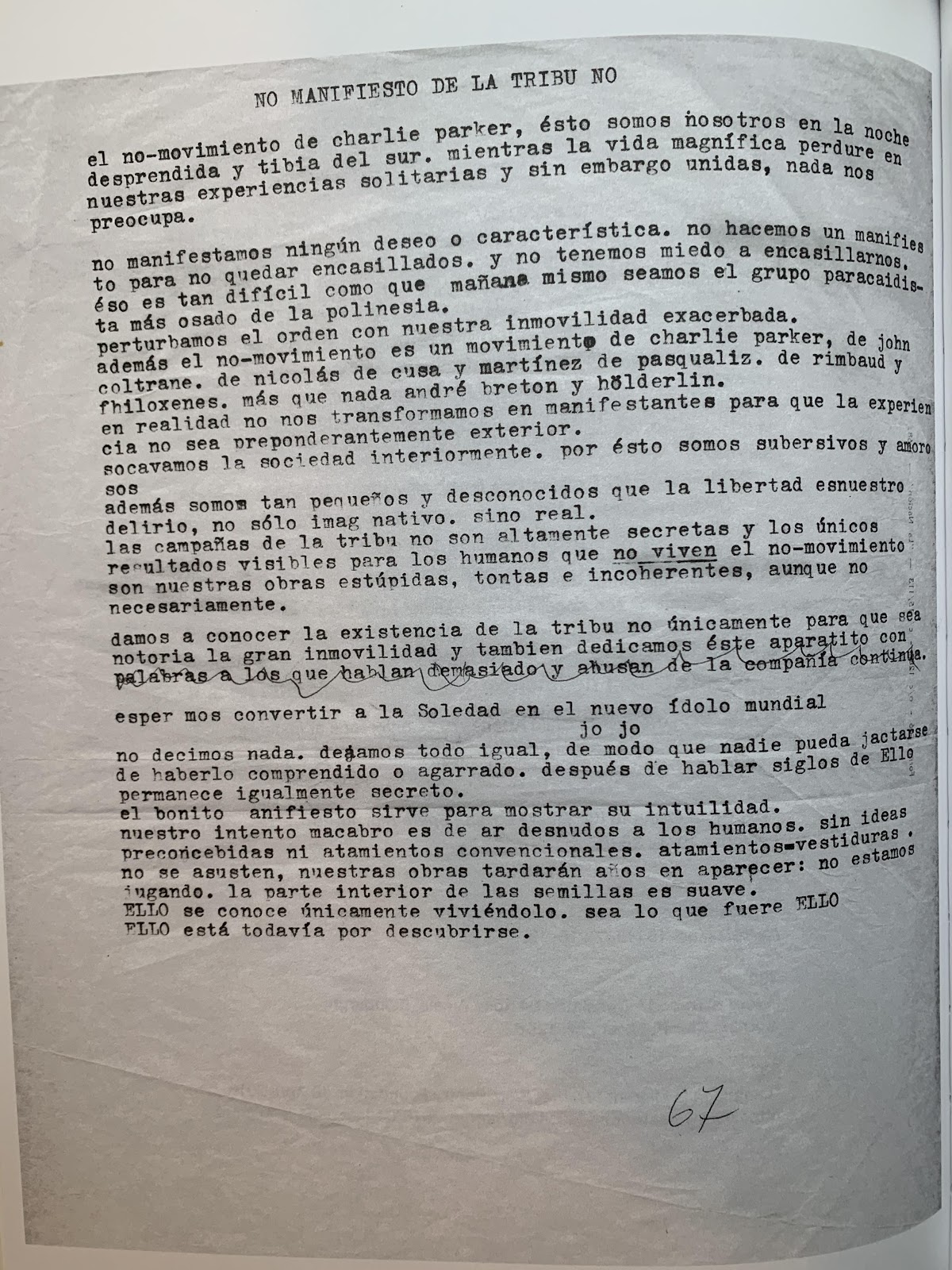 In his essay, Miguel A. López writes, “In September 1967, Vicuña wrote a draft of the ‘No-Manifesto’ [Non-Manifesto] in her journal; this was the document that led to the founding of the Tribu No… Tribu No was an expression of liberation and collective joy… Their improvisations came from a different genealogy [than that of happenings, art actions, and performance art of the 1960s being explored by Western artists in North America and the European continent], one that was closer to deterritorialization of the poetic field… The Tribu No organized a number of non-activities, many of which went unnoticed by anyone outside the group… Their non-activities were not an attempt to score cultural points or be put on official literature pedestals, but to spend time pleasantly and creatively with no specific purpose in mind... ” (3)

There are alternative realities. Existing systems may be subverted. And this reality may be brought into our world as a form of activism.

Guha concludes his essay gesturing towards the danger of reciprocal nationalism. Vicuña’s work is attentive to internationalisms, to multinational and indigenous politics. It may be local, but even the local is interconnected to other localities.