"Living Instruments:" The Noise of Collective Bodies, a review of a screening of films and conversation with Cecilia Vicuña and Daniel Borzutzky
by Consuelo Tupper Hernández

With the help of CCA’s Exhibitions and Public Programming department, CCA students have created Rewind Review Respond, a digital space for informal discourse. In the second volume, published in Spring 2021, Consuelo Tupper Hernández reviewed the Wattis online screening and conversation with Cecilia Vicuña and Daniel Borzutzky.

Committed to exploring the power of embodied language since the ’60s, the Chilean artist, poet, and activist Cecilia Vicuña continues to make work that engages with and responds to the various ways political contingencies affect our relationships to one another and the environment. 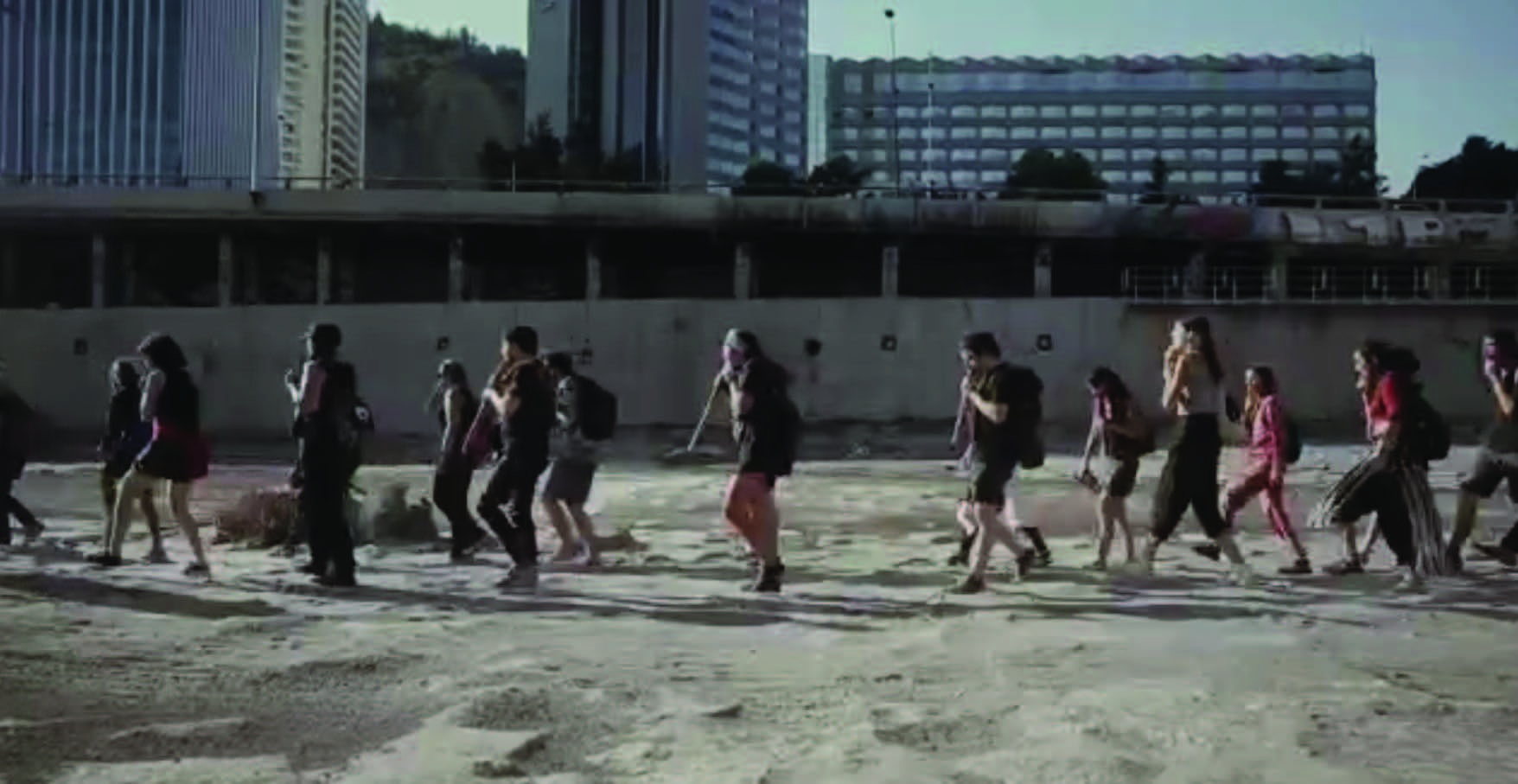 On February 11th, the Wattis hosted an online premiere screening of recent films as part of the year-long research season revolving around Vicuña’s work. Two pieces caught my attention due to their use of noise as a source of meaning and a tool for political transformation. By combining different instruments, songs, and voice inflections, each short film offers a sensuous experience to the viewer that connects directly to how the body has reframed collective action in Chile and the world over the last decades. The short film “Rito por el Mapocho” (2021) depicts a collective ritual enacted in 2019 alongside the river that crosses Santiago from East to West. In the film, a group of people sing to and interact with the drying riverbed to speak against the privatization of water that began in Chile in 1981. “El veroír empezó” (2021) records a 2019 singing performance held at the Gabriela Mistral Cultural Center (GAM) that invited visitors/participants to closely look at each other, thereby honoring the lives and sensitivities of those protesters that lost one or both eyes by hands of Chilean security agents in 2019. 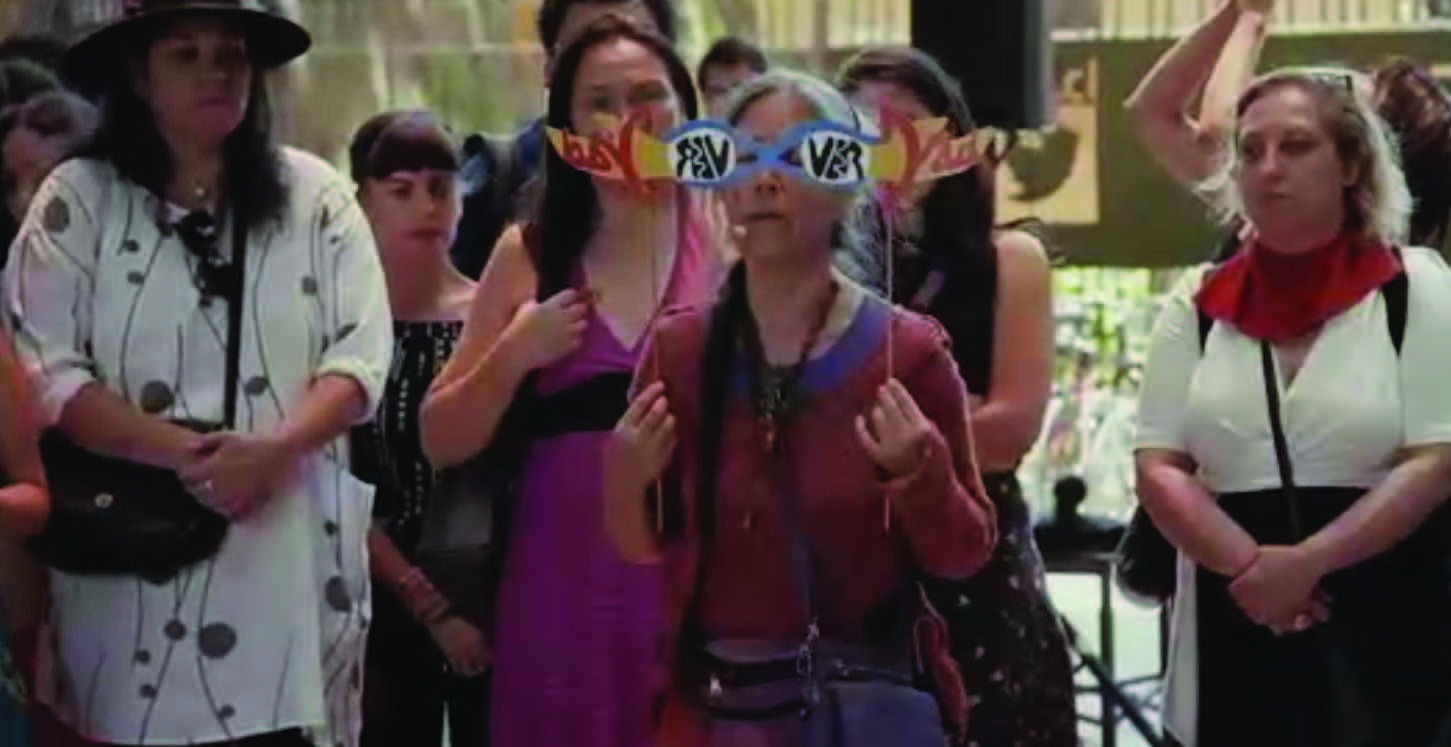 These films were both made in Santiago de Chile in a period of substantial political unrest. Years of repressed social frustration exploded on October 18th, 2019, when millions of people took to the streets for over five months, demanding the end of an inhumane system articulated through dictatorship and perpetuated by a constitution still in rule space to recount here. However, what is most relevant to note is that stemming from decades of repression, people have found ways to speak back to hegemonic structures that are more and more connected to physicality and poetry: languages that Vicuña knows very well. In fact, over the past decade in Chile, the body has become the most crucial space for public meaning to be challenged and transformed. This transformation is especially prominent in Vicuña’s films, as she makes work responding to situations in which the body is directly affected: legalized water looting leaving whole towns without water to drink or cook, and the police shooting rubber bullets that left 400+ pacific protesters blind in one or both eyes. Within this context, and responding to levels of violence that regard certain human bodies as disposable, the collectivities that perform in Vicuña’s videos decide to transform themselves into living instruments, as if they could sing, murmur, moan, and yell their way out of pain and injustice. The tension each performance provokes in the viewer seems to rely on how the participants’ sounds continuously move from a state of musical harmony into one of cacophonic disruption. While intuition is a crucial component of Vicuña’s art, I believe these gestures are also historically situated. 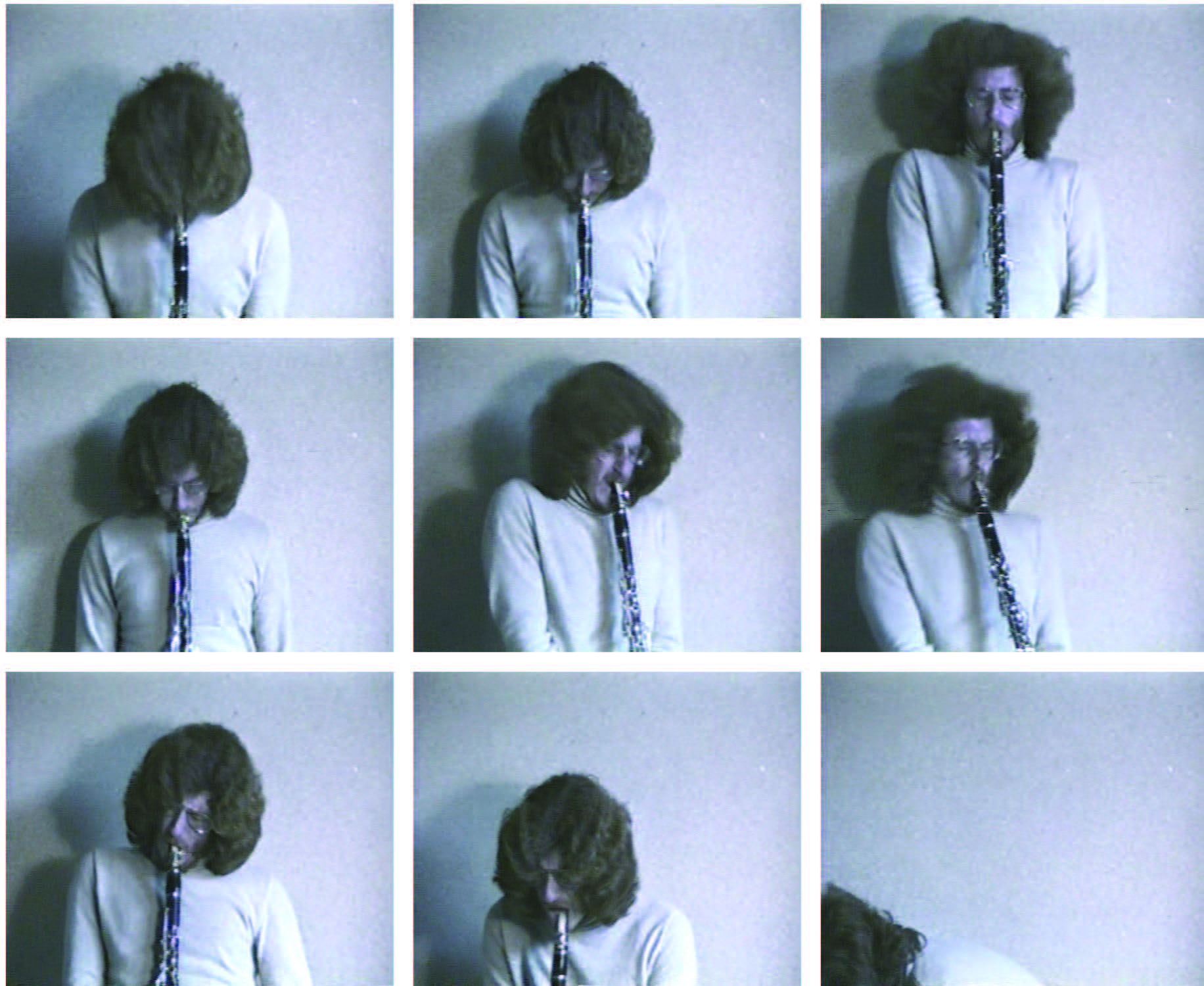 In 1981, in the middle of the bloody and highly repressive dictatorship led by Augusto Pinochet, Chilean artist Alfredo Jaar made a video performance called “Opus (1981/Andante Desesperato),” in which he desperately played the flute for over seven minutes, originating all kinds of dissonant noises until he ran out of breath. The piece, simple and straightforward in configuration, depicted one way Jaar found to speak without words to regain a means of (paralinguistic) expression during a moment in which speaking meant putting one’s life at risk. 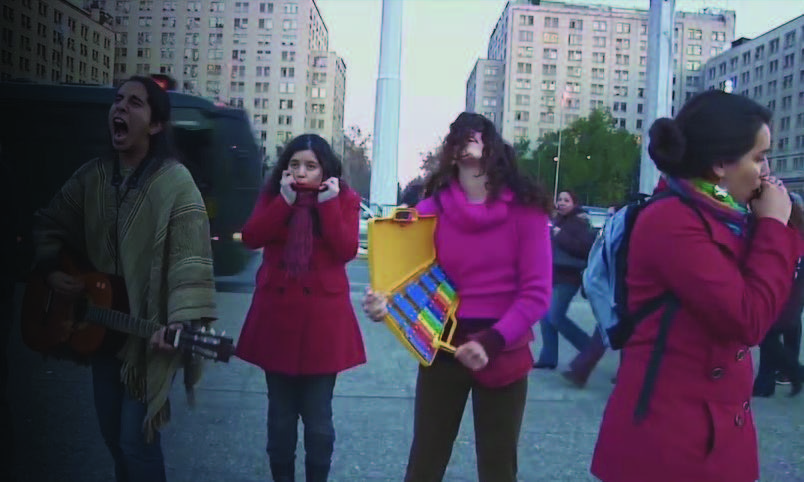 Thirty years after this, in 2011, a ninemonth-long wave of massive student-led protests demanded access and equity in the educational system that was vastly privatized and legally turned into a business during Pinochet’s dictatorship between 1981 and 1986. Amid a convoluted country and following a series of public performances that sought to reconfigure the traditional format of the protest, a group of art students referenced Jaar’s piece by frantically playing all sorts of instruments in front of La Moneda, the Chilean government’s palace (figure 4). The deafening noise lasted several minutes, confusing both passersby and the state security agents surrounding the area with anti-riot water cannon trucks. Finally, police officers took some of the protesters into custody, forcing the action to end.

With these two historical episodes in mind, the changing stridency of Vicuña’s performances seem to address the current political moment while addressing the past, channeling its suffering and honoring the legacy of those who have lived and died by resisting. Though made by a Chilean artist and stemming from recent Chilean history, these video pieces are not only about Chile. Beyond national frontiers, the complexity of the body as a historically and spatially situated force has gained political agency at a global scale as we see the struggle for survival becoming more critical and pervasive. How can language transform reality? Cecilia Vicuña’s films ask this question over and over again. In a world where words have become increasingly suspicious and insufficient, the body seems to be our only way out. In this regard, “Rito por el Mapocho” and “El veroír empezó” act as possible paths to reclaim the agency we all have as living, sensitive, resonant human beings. Now, let us hope for the day all these noises finally reach the ears of the ones who conveniently and persistently choose not to hear.