Hands-Off: John Baldessari and the Early Years of CalArts
by Emily Markert
The California Institute of the Arts, or CalArts, was founded in 1961 by Walt Disney as the result of a merger of the Los Angeles Conservatory of Music and the Chouinard Art Institute. Although Disney passed away in 1966, CalArts opened its doors to its first students in 1970. Much has been written about the notoriously chaotic early years of CalArts (1970-1975), during which a faculty of visionaries took Disney’s idea for a collaborative, creative community and created an interdisciplinary school with no curricula nor grades, focused on experimentation and individual self-discovery. There were no drawing courses, but students could participate in happenings with Dean Allan Kaprow, or take a class on rolling joints. In the Critical Studies department, one sociology class was in session any time the teacher saw one of his students on campus. (1) 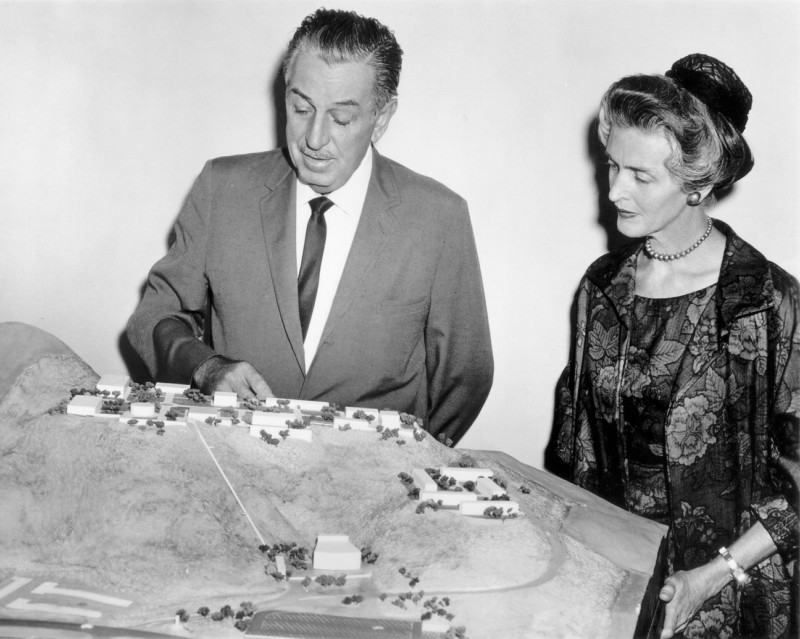 Superlative examples aside, CalArts’ first teachers implemented radical pedagogical methods to provide students with tools to investigate the world and create original work informed by conceptual ideas. These were not literal tools; as Paul Brach, Dean of Art, put it, “Rather than learning techniques and attitudes based on ‘you never know when you'll need this,’ they started with the idea of ‘no information in advance of need.’” (2) Instead of teaching technical skills, teachers introduced students to theory, facilitated conversation, and shared research skills, aiming to inspire individual curiosity and germinate content-based artwork. Students’ individual creativity and ability to articulate their ideas was “tested” by frequent critiques. Ironically, these methods produced ambitious, competitive students who were well-prepared to enter the professional art world with unique work, fulfilling Disney’s wish that CalArts allow “the curious mind [to] seek its own path towards expression.” (3)

Of all the initial faculty, John Baldessari is most synonymous with the early identity of CalArts. Although he was hired in 1968 to teach painting, he quickly decided he wanted to create a more “broadly inclusive” class. Dubbed “Post-Studio,” Baldessari welcomed any student who ostensibly did anything other than paint. (4) Reflecting on his pedagogical approach in 2003, Baldessari said “while I didn’t think you could teach art, you could supply information.” To do this, he took his students on trips to see galleries and explore nature, and organized visits with artists from New York and Europe, such as Lawrence Weiner and Richard Serra. (5) When they met in the classroom, Baldessari presented students with materials such as exhibition catalogues, magazines, and pop culture ephemera to percolate ideas. (6) 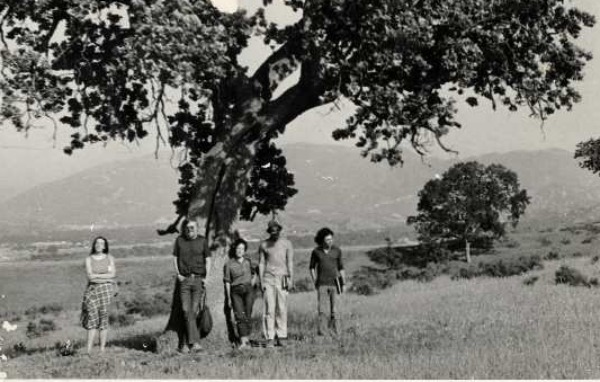 Like most of the teachers at CalArts, Baldessari had no expectations for students’ material output – instead, he focused on providing resources and fostering generative discussion. Baldessari’s goal was not to teach technical skills, but to “set up a situation where art might happen.” (7) As artist Jack Goldstein recounts in Jack Goldstein and the CalArts Mafia, Post-Studio students “didn't get very much hands-on education, but [they] learned a whole new attitude about what art could be – not expression but investigation.” (8) By calling his course “Post-Studio” instead of “Conceptual Art,” Baldessari also enabled his students to pursue unique ideas and aesthetics, rather than emulate his work. (9)

In his own words, Baldessari “didn’t want to call [the class] ‘Conceptual art’ because I wasn’t sure that’s what I was doing.” (10) But by 1968, he was exploring ideas that would become core to this artistic movement. Baldessari had been teaching art and creating his own paintings since the mid-1950s. But in 1970, he had all his paintings (1953-66) destroyed in a performative gesture titled Cremation Project. The ashes of the works were collected into boxes, except for a portion which Baldessari baked into cookies. Cremation Project marked Baldessari’s move from traditional painting to, as Lynne Cooke describes it, “a realm of activity which had no boundaries,” with specific attention paid to the definition of what an art object could be made of or look like. (11) Around the same time, he created Wrong (1966-68), in which he hired a sign painter to scrawl “WRONG” underneath a photo that went against the conventions of “good” photography taught in art schools and reinforced by the art market. Wrong demonstrated Baldessari’s interest in core tropes of conceptualism, such as the removal of the artist’s hand. But Wrong also represented Baldessari’s foray into critiquing fine art pedagogy and the definition of “good” or “correct” art in his own work. 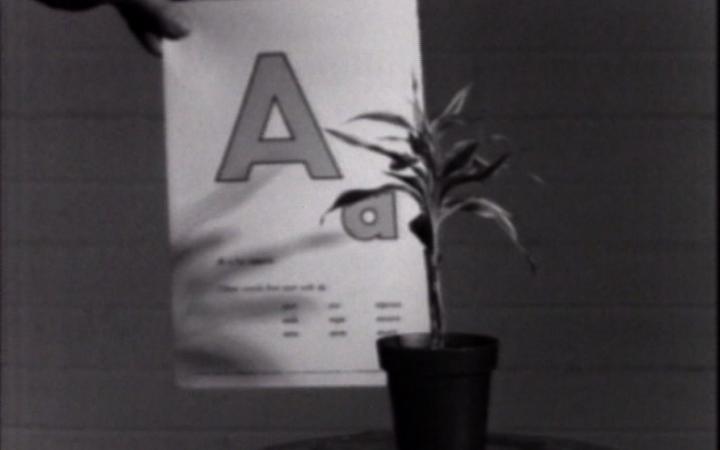 After starting at CalArts, he continued to interrogate pedagogical methods he deemed outdated or insufficient through works such as Teaching a Plant the Alphabet (1972). In the video, Baldessari holds up cards bearing each letter of the alphabet beside a small houseplant and repeats them aloud several times. Even if the plant had ears or eyes, this “lesson” would hardly convey the idea of language, for which the alphabet is a building block. In this way, the work highlights what Baldessari sees as the fundamental flaw in arts pedagogy, wherein skills are taught devoid of their potential to carry greater meaning. As a video, this work also signals Baldessari’s shift towards multimedia art in the 1970s, which was likely enabled by the seemingly endless resources afforded to CalArts students and faculty thanks to the Disney fortune.

None of Baldessari’s works blur the line between teaching and art-making quite like List of Art Ideas. Distributed on the first day of Post-Studio class, this literal list featured vague provocations and open-ended questions designed to interrogate the authority and limitations of the concept of the art assignment, such as “#37: What kind of work can be done literally under the earth,” or “#102: Composition based on the duration of, say, one gal. of paint.” List of Art Ideas has inspired innumerable artists since, including at the Wattis, which held an exhibition entitled John Baldessari: Class Assignments (Optional) in 2012. 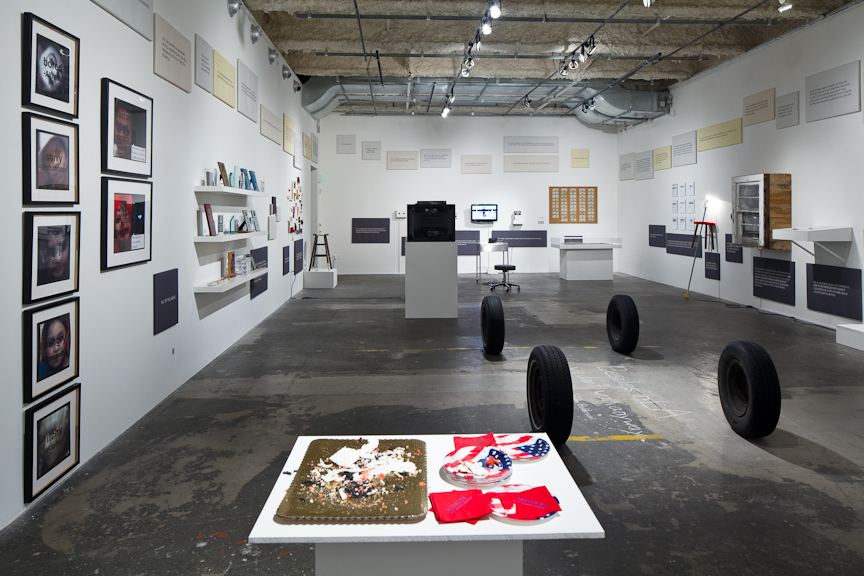 The exhibition featured more than 65 works created by students from California College of the Arts’ MFA program, all inspired by Baldessari’s List of Art Ideas prompts. Instead of wall labels, visitors were provided with an annotated version of the complete list. To identify the artist behind each work, visitors first needed to deduce the assignment to which it responded. In this way, the artworks relied upon the List of Art Ideas to complete them, making the list inextricable from the work, as if Baldessari and the artists were collaborators. By offering the List of Art Ideas provocation to students, the Wattis exhibition echoed and explored Baldessari’s non-hierarchical and hands-on approach to arts education. John Baldessari: Class Assignments (Optional) was held on the heels of a major international retrospective of Baldessari's career, thus offering an alternative way of examining Baldessari’s work and pedagogy and alluding to their inseparability. (12) 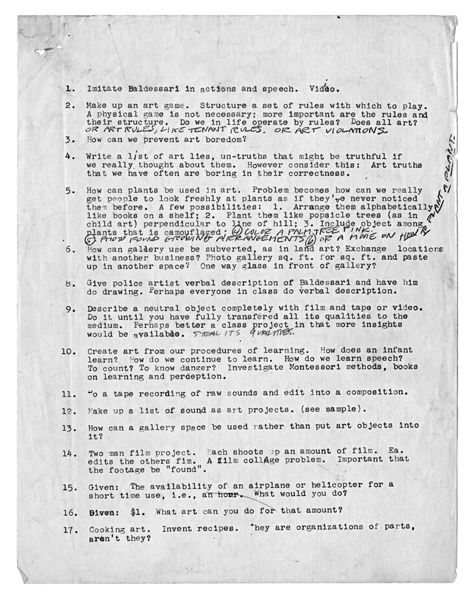 Baldessari himself realized many of the prompts from List of Art Ideas throughout his career – in fact, one of his most famous works from the 1970s appears on the list: “#45: Punishment. Write ‘I will not make any more boring art; 1000 times on wall.” In 1971, Baldessari executed this work by “assigning” it to students at the Nova Scotia School of Art and Design. As Jacqueline Ardam points out in her article “On Not Teaching Art: Baldessari, Pedagogy, and Conceptualism,” the work thus echoed the antiquated schoolroom punishment of writing lines on a chalkboard to engrain a message in the student’s head, yet another pedagogical method which Baldessari sought to disparage. (13)

In a way, Conceptual art is founded on the same pillars as CalArts itself: prioritizing the strength of one’s ideas and creativity above craft, with no preconceived notions of what the final product should look like. (14) In fact, Disney himself had hoped that CalArts would teach students the “wedding of many techniques, that the new may have unexpected beginnings…[and] commonplace materials suddenly take on fresh forms.” (15) It perhaps comes as no surprise, then, that Baldessari’s pedagogy is inseparable from his art practice of the early 1970s. But, importantly, Baldessari was able to effectively explore his interest in such concepts by teaching the Post-Studio class.

As Baldessari’s practice evolved, he continued to teach, mentoring hundreds of students over his nearly 50-year career. CalArts’ John Baldessari Studios, dedicated in 2015, stand as a testament to the significant impact he had on the school and generations of students there. But the studios also serve as a monument to his commitment to radical arts education, through teaching as well as his own practice. 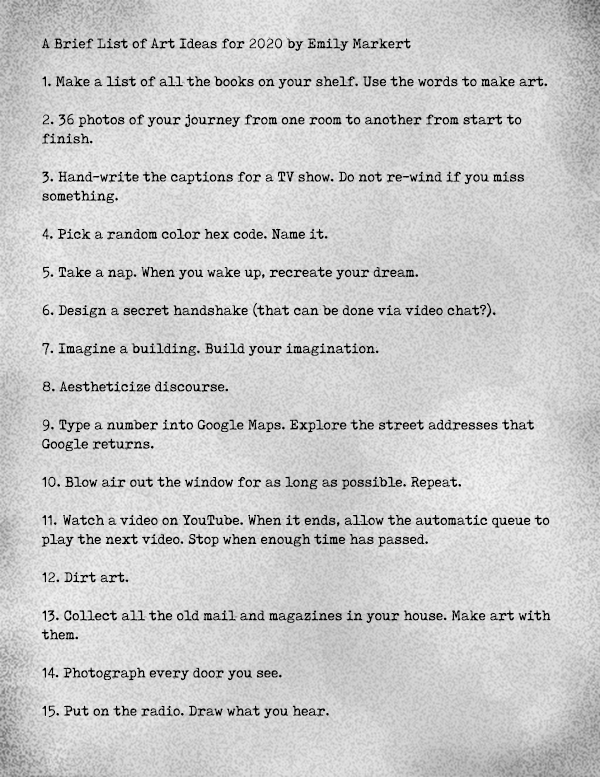 Emily Markert is a Curatorial Fellow at the Wattis and a graduate student in CCA's Curatorial Practice Program, class of 2021.