“My art was born at the meeting point of two waters, the Aconcagua River and the Pacific Ocean”(1)

Standing there, she felt compelled to respond to the ocean, to make a sign that she understood its presence, she picked up a stick and made a structure, adding more sticks to make a spiral design. When the tide washed her structure away, she accepted it as the response from a sentient ocean, a completion of the work she had put into the world. Her structure was not intended to dominate or control a force of nature, only to create a relation to it. In the poem she writes, “Undoing completes the doing.”(2) She called it “arte precario” and defined it later in the poem, “Precarious is what is obtained by prayer, uncertain, exposed to hazards, insecure.” 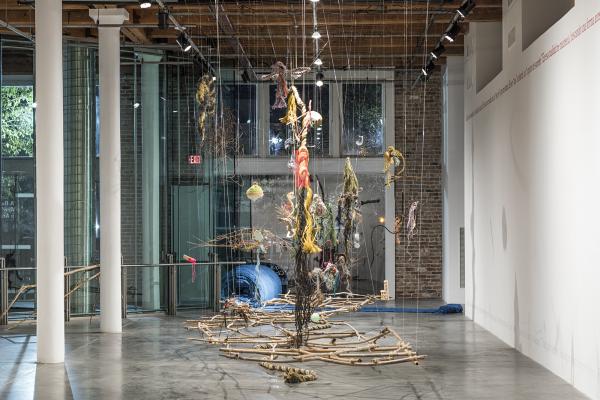 The exhibition About to Happen, her first solo show in the United States, at the Contemporary Arts Center in New Orleans in 2017, featured over 100 of these precarious constructions. They are site-specific, made of debris and cast-away things, both organic and man-made. They stand or hang together in loose associations of perfectly-balanced textures, colors, and materials, each element seeming to prop up the other – tectonically as close as one can get to an illustration of Antoine de Saint-Exupery’s description of perfection: “… achieved, not when there is nothing more to add, but when there is nothing left to take away.” Indeed, nothing can be taken away from the fragile assemblage that would not result in its total collapse, the “undoing” that would complete the doing. The “precarios” have been described as visual poems, metaphors in space, manifestos of ecofeminism, even proof of an unsustainable capitalism. Vicuña problematizes the analogy represented by the binaries male/female and culture/nature. Precarios are simultaneously curations of the natural world and the cultural one, not only because they are comprised of both natural and man-made objects, but because they become part of the cultural world as works of art. At once aesthetic and political, Vicuña’s re-use of found materials is also a tacit undoing of commercial schemes of planned obsolescence that seek to boost consumer culture; material that would otherwise be trash is put to artistic use, up-cycled. Perhaps all these descriptions are true. But these are not objects, Vicuña insists, but a record of encounters.

Certainly, taken together, as they were mounted at BAMPFA and the Wexner Center, with precarios on a wall, or hanging from the ceiling, or in a grid on a rectangle of sand at the CAC, they construct a sensory experience, an installation which is not complete until the territory it defines is transgressed by a viewer. In its territoriality and site-specificity, as well as the way the material is used to evoke memory and sensory experiences, it performs techniques that are foundational in the architectural discipline, techniques and strategies used to organize and structure perception. It is not a surprise to discover that Vicuña understood very well which profession would give agency to her desire to signal her “awareness of an awareness” of the environment. 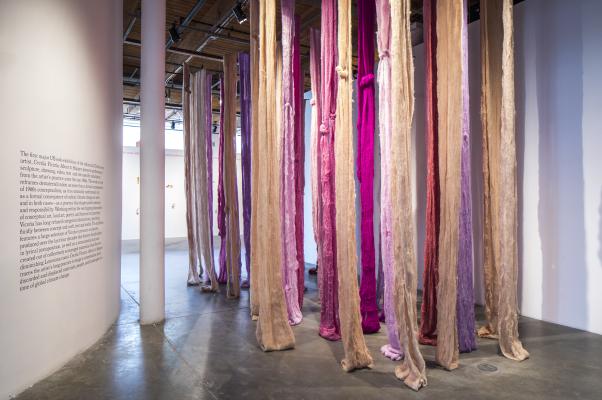 “My dream was to be an architect…I felt that architecture was a total art where I could do poetry in the city, where the city itself would be an art form.”(3)

As an architect, I share Vicuña’s feeling – that architecture is, can be (should be?) poetry in the city. Architect Lina Bo Bardi (4) was equally explicit: the opening lines of her 1957, richly- illustrated essay, "Contribuição Propedeutica au ensino da teoria da Arquitetura (Propædeutic Contribution to the Teaching of Architecture Theory)" describe the discipline in the broadest sense, “Architecture is the product, or better still, the projection, of civilized man in the world.”(5) Consistent with Vicuña’s intuition, Bo Bardi’s definition of the field was all-encompassing: "What is meant by architecture?... architecture is almost implicitly every type of structure and representation from the structure of rocks, the skeleton, the infinitesimal figure of the atom, to the appearance of the spheres that compose the planetary system."(6) She considered architecture as an expression of urbanism, an art and science of public life that has a responsibility to the collective.

In many ways, like the title of Vicuña’s exhibition, architecture, too, is always “about to happen.” The architectural project exists in a state of becoming, between the theoretical building and the constructed one, between its noemic strategies and their material representations, between the physical models and the buildings themselves. 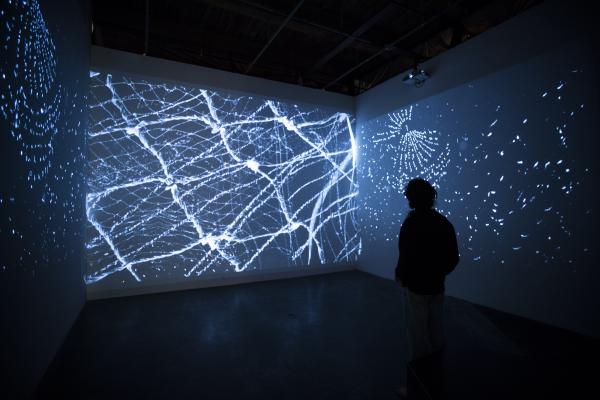 Limits, boundaries, and territories marked the land and the language of our ancestors. The natural lines and walls of the landscape remain as a transcript of its transformation. Architecture emerges from these traces, from the story told by the site. Lines mark the path of water torrents, of the long process of snow melting at the top of mountains headed towards the rivers, then the ocean. Other lines might be those of man-made walls, constructed to offset the erosion caused by these torrents, or to steal the water from the sea, directing it to agricultural irrigation systems or cities. Still other lines mark the limits of property, areas for planting or grazing, paths of beaten down earth made from repeated traversing, cities planned and paved on these traces. Delimiting boundaries such as these, assuring that construction proceeds without collapse, precisely without “precarity,” is the theoretical underpinning of the work of an architect. Architecture is conceived as an ultimately spatial and tectonic discipline, meant to stand up, to be permanent, to avoid precarity, danger and collapse.

The precarios challenge the contradictions implicit in this conception of architecture. After all, they do stand up, they exist in all their fragility in a gallery because they are presented in an environment where the rules of care are enforced. We care for them, protect them, don’t trample them with our thoughtlessness and neglect. At the edge of an ocean, they disappear when the tide “completes” them. So do buildings.

Cathrine Veikos is an architect and author who writes on architectural representation and design. Her book, Lina Bo Bardi: The Theory of Architectural Practice (Routledge, Taylor & Francis, London, 2013, New York, 2014), is a translation and introduction to the writing of the Italo-Brazilian architect, Lina Bo Bardi (1914-1992).

(1) About to Happen, Cecilia Vicuña, curated by Andrea Andersson and Julia Bryan-Wilson, Catalogue CAC, New Orleans, 2017, p. 6.
(2) Ibid, p.9.
(3) Julia Bryan-Wilson, “Awareness of awareness: An interview with Cecilia Vicuña” in About to Happen, Cecilia Vicuña, BAMPFA New Orleans Catalogue p. 112.
(4) Lina Bo Bardi (1914-1992) was one of the most important Brazilian architects of the 20th century, designer of major buildings including the Museum of Art São Paulo, the SESC Pompéia, Solar do Unhão, and Teatro Oficina, as well as furniture, theater sets, and over 100 exhibitions. She edited and wrote for the journal, Habitat, which she co-founded. In 2021, she became the first female architect to be honored with the Special Golden Lion for Lifetime Achievement (in memoriam) at the Venice Biennale.
(5) Bo Bardi, Lina. Contribuição Propedeutica au ensino da teoria da Arquitetura (São Paulo: Habitat, Ltd., 1957); reprinted in 2002 by Instituto Lina Bo e P.M. Bardi; edited and translated by Cathrine Veikos in Lina Bo Bardi: The Theory of Architectural Practice (London: Routledge, Taylor & Francis, 2013). p 58.
(6) Ibid.