On Lydia Ourahmane: Solar Cry
by Anthony Huberman
Initially, I wanted to write this in the form of a chant or a hymn. Or by scatting, like Ella Fitzgerald singing over a drum solo, doht dee duht boh duht dee … bahp m deel yuyl doo ee. It would be a text spoken in tongues. But then, I feel my pocket vibrate and ding and see that I received a text message from Lydia. It’s a picture of a 6,000 year old Cyprus tree, along with a message:

I finally worked out what faith is.


Part of me wants to stop right here. I’ve already said everything that needs to be said about this exhibition: it’s made of wordless speech and sounds, vibrating onto bodies, with a message from the artist about the Long Tail of the sacred.

The only way to respond to her message, I reasoned, was not to. Not via text, at least. The topic of faith is far too big, too old, and too loaded to get into, but in a broad and abstract sense, perhaps it’s what we need when we come face to face with the unintelligible. It’s what rushes to the rescue when we jump into a void, preventing the vertigo that comes with having no points of reference. It’s when belief becomes a basis and form of understanding—which can be comforting but also dangerous. Religion, for example, is one way to organize faith or belief around a certain set of principles and rituals. But beyond whichever ideas or explanations our beliefs might provide us, they are also experiences. Something happens to the body.

Lydia Ourahmane is interested in how belief is registered on the body, in the ways it is made material. Even if belief is a mental state, she asks, does it also have physical repercussions? How does faith or belief materialize, as it rushes through bodies? Does it leave a mark of where it’s been? And does it linger in empty buildings, like an echo, long after believers have left? What types of human belief systems has that Cyprus tree witnessed?

The title of her exhibition, صرخة شمسية Solar Cry, is borrowed from a short text by Georges Bataille where he describes the sun as the most abstract of all objects because it’s impossible to look at. As such, he claims, it represents all that is elevated and out of reach—the sacred. It turns out that Bataille also used many other words to describe the sacred: impossible, inner experience, absence of God, peak experience, rapturous self-loss, altered state, silence. If faith is what we turn to when faced with the unintelligible, the sacred is that sense of suspension that happens right before we do so. Religion might be there to provide answers, as is logic, science, morality, and so on, but the sacred is the stunned interrogation itself, the negative space that precedes and envelops all of those explanations. It can’t be performed because it’s always already there, and it can only ever be witnessed, never obtained. It’s experienced as a lack, an absence, a short pause, a skip in the record, and it reveals all the noise that is the human experience.

Alain Badiou talks about an inaesthetics, about inserting a lack into an instance of plenitude, I write back.

A Solar Cry, then, is one where silence is sovereign. It’s a cry that thickens all the interruptions and the intervals between sounds—the suspended part of the beat that makes the rhythm. It’s the gaps that open up between the grooves. With this exhibition, Ourahmane harvests the space’s past and present silences, making them ready for visitors to witness. She creates a context where some of those sacred cries might be felt, even for a short moment, and where they can leave traces behind as they pass by.

Another ding and vibration. I want to create a context that produces the potential for a miracle.

The artist’s own past has left its traces on her, obviously. For her, faith and belief contain the experience of war. She was born in Algeria, to parents who were active members of a Christian minority, and grew up near Oran, in a commune-like safe house her family ran. It was a place that welcomed fellow believers and recent converts, giving them a place to be together. At the same time, this act of gathering made them exposed and vulnerable to extremists who were fighting an authoritarian government in a brutal civil war that would last over a decade, with countless killed. In that context, to believe meant putting your body, your life, and your children’s lives in danger—as a member of a persecuted minority. Belief became a contestation of social, political, and military pressures, which squeezed those bodies into a vice, limiting or preventing their freedom of speech and movement. By necessity, people learned to live within the negative spaces. Even after the war ended, in 2002, the state prohibited any form of public gathering and it was only recently, in 2019, that the people began claiming physical space and occupying the streets.

Living through all of this has taught Ourahmane about different forms of escape and departure. She has learned to recognize, trust, and even foster the experience of negative space—the unintelligible, the impossible, the absence of God, rapturous self-loss, silence, the sacred. This can’t be articulated or arrived at via language or images because miracles are never ideas, at least not initially. They are always felt. They are material, like a bullet that hits a wall just inches away, or like an apple falling on Newton’s head.

Ding. Bzzz. This time, it’s a link to a PDF of “Who Touched Me?,” where Fred Moten tells Wu Tsang that all we are are instruments.

صرخة شمسية Solar Cry is an orchestra. In the main gallery, an opera singer sings with herself. There is speech but no words, as if a voice had been liberated from language and allowed to remain closer to breath, or as if a breath had been stopped before it could become language. Stacking the voices on top of each other creates a thickness, where what counts is their materiality, their weight in the room. The recordings can’t possibly be in synch, and yet, as they pile on top of each other, over time, they might find each other and open up small moments of synchronicity and resonance, like secret lovers.

Bzzzding. I’m interested in how it’s possible to speak something into existence.

A few months before the exhibition, Ourahmane traveled to Tassili N’Ajjer, a plateau of rock valleys and formations in the Algerian Sahara desert, on the border with Libya and Mali, where 15,000 cave paintings date back 12,000 years. The experience of the desert, much like that of the sacred, cannot be articulated via language but can only be witnessed. Like the sacred, the desert is too big to see. Like the ocean, it, too, is inhospitable to humankind. It swallows presence. She went there to listen to its absence and to record its silence. 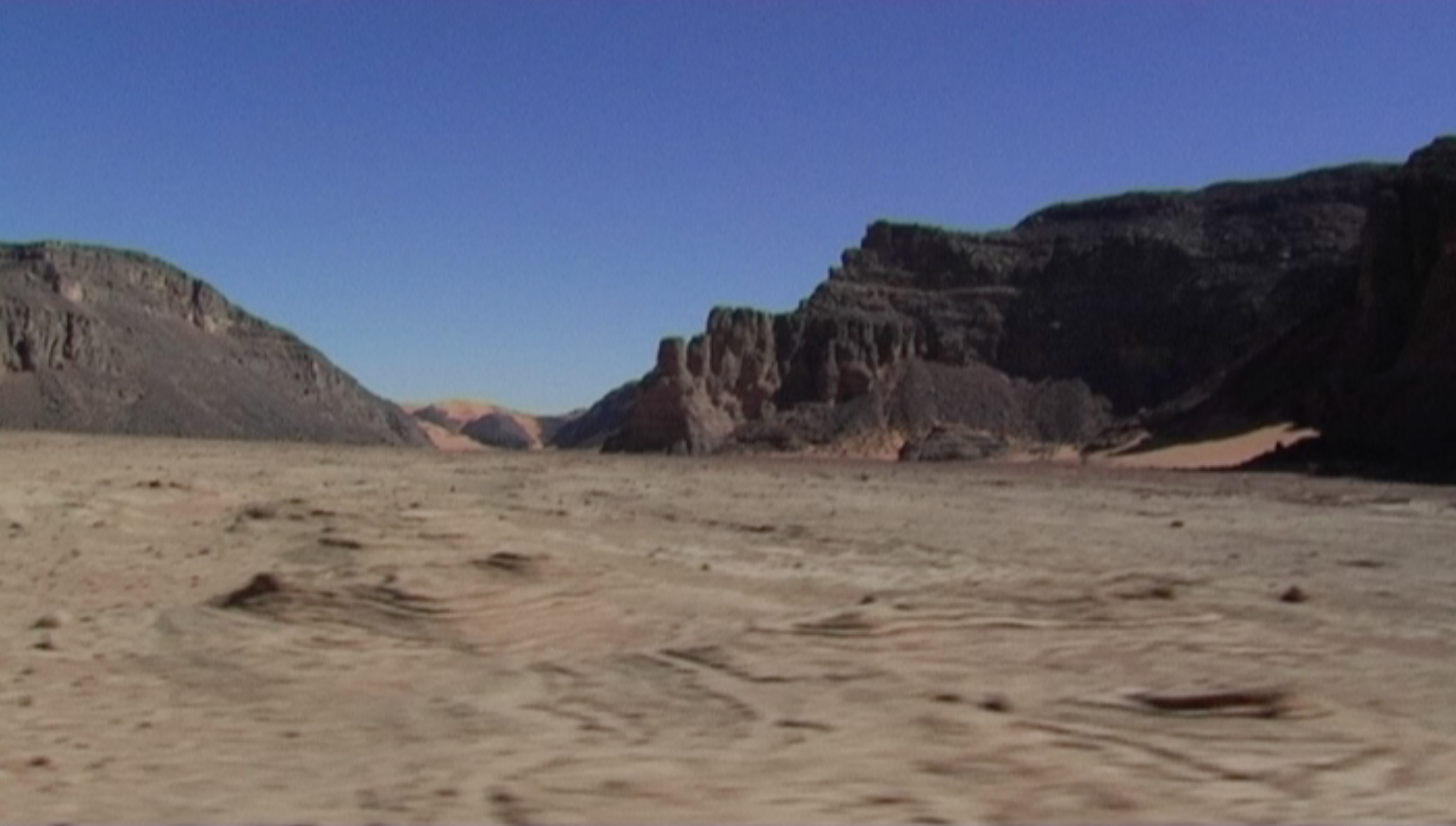 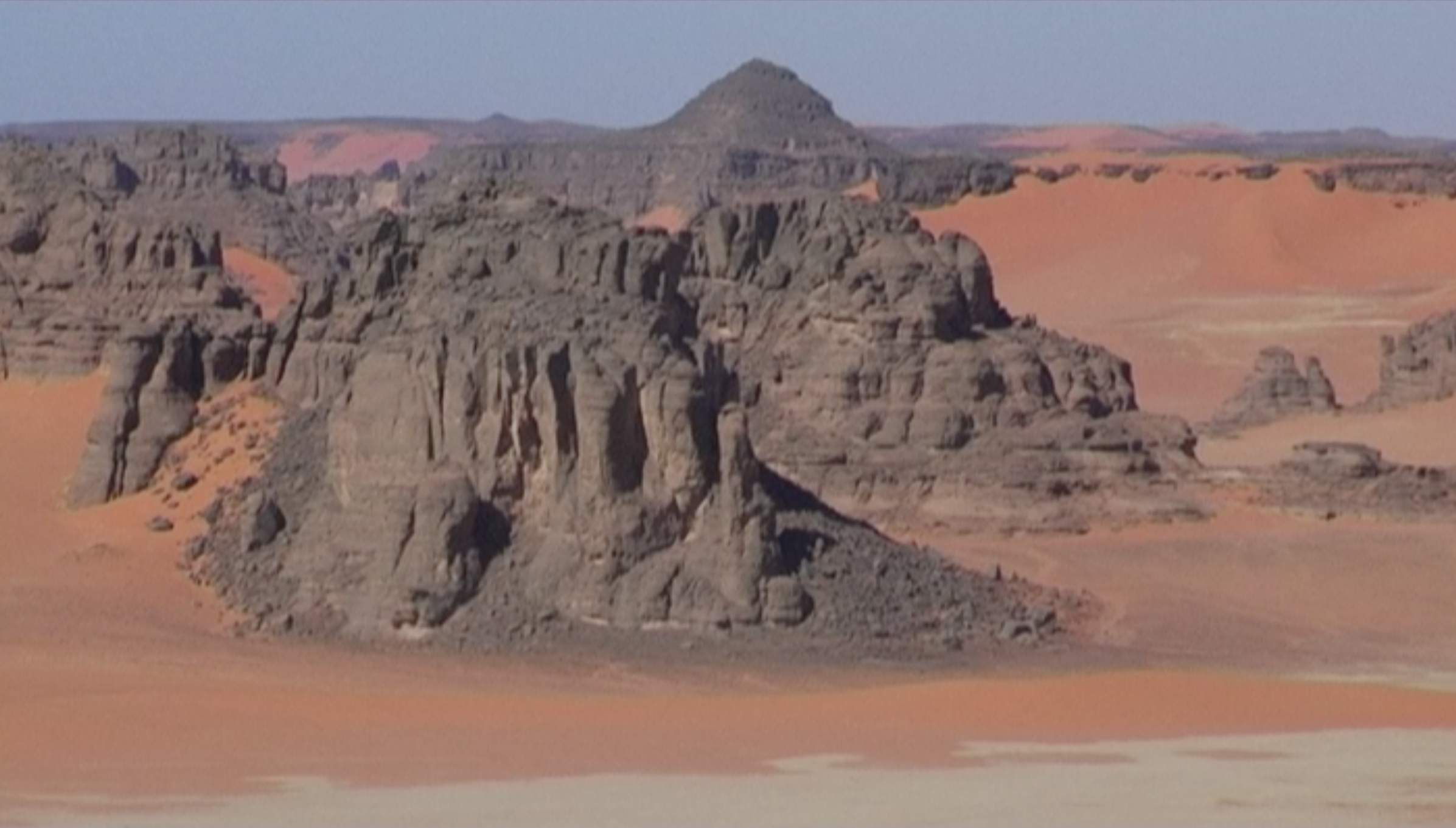 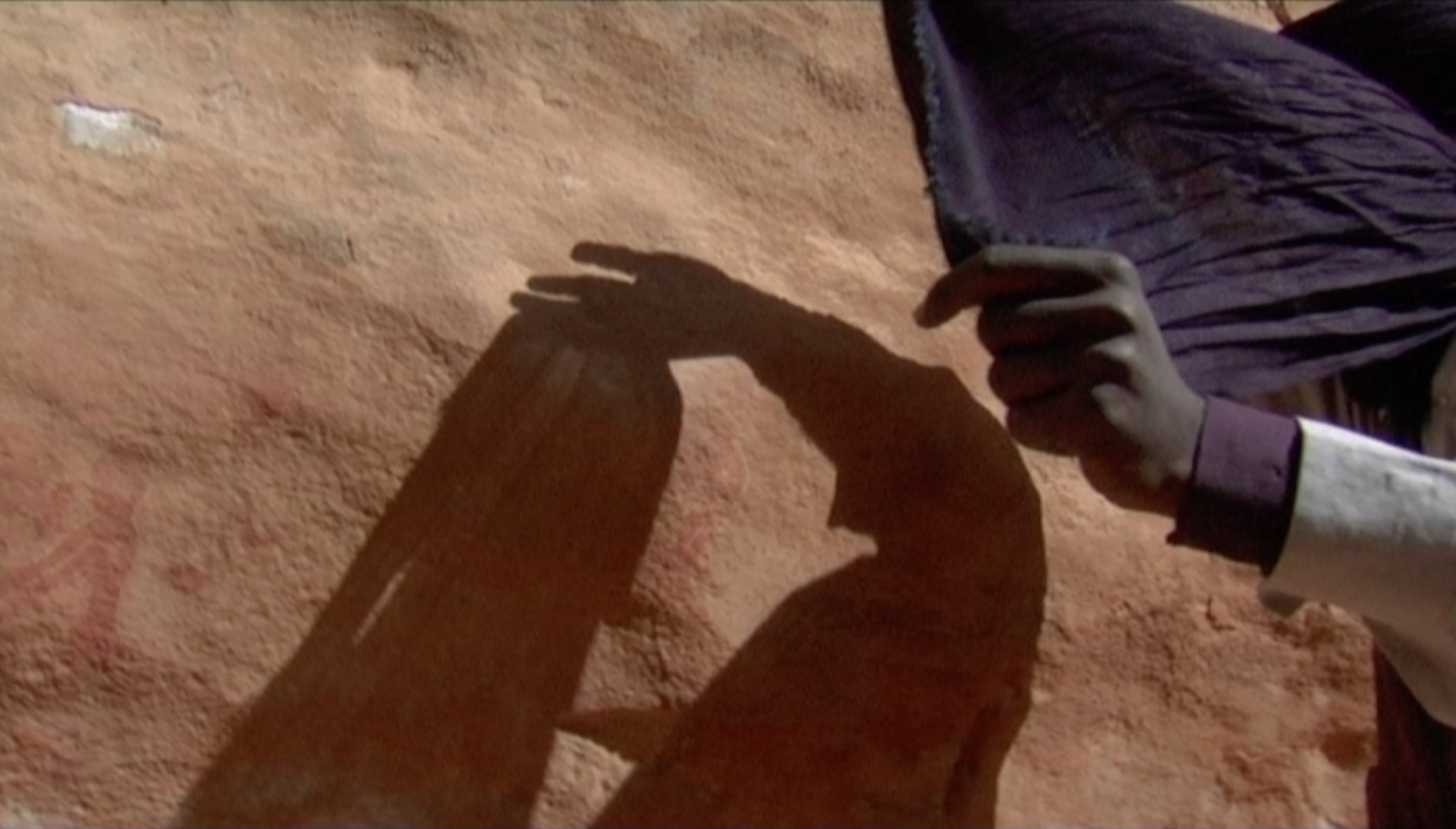 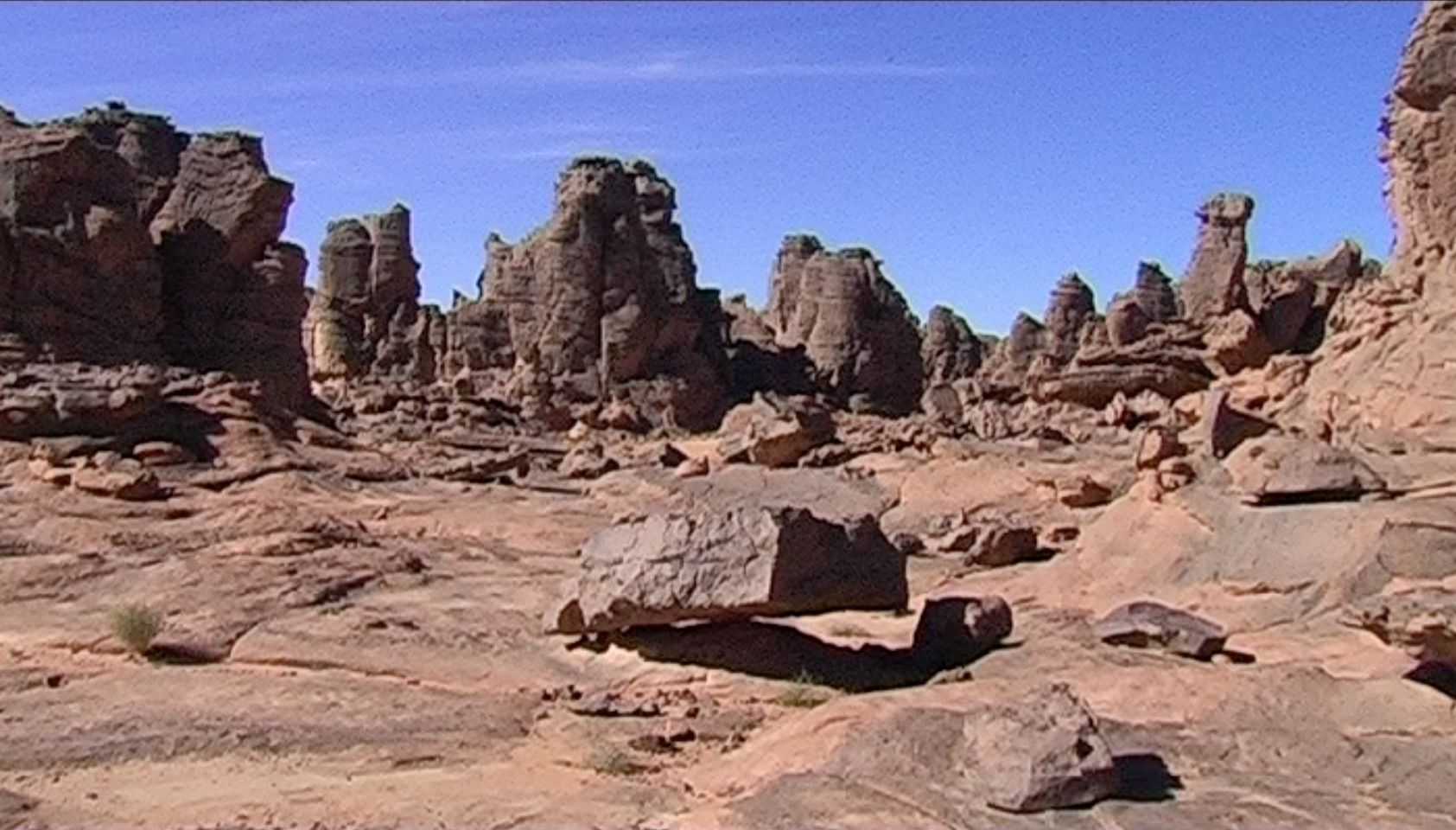 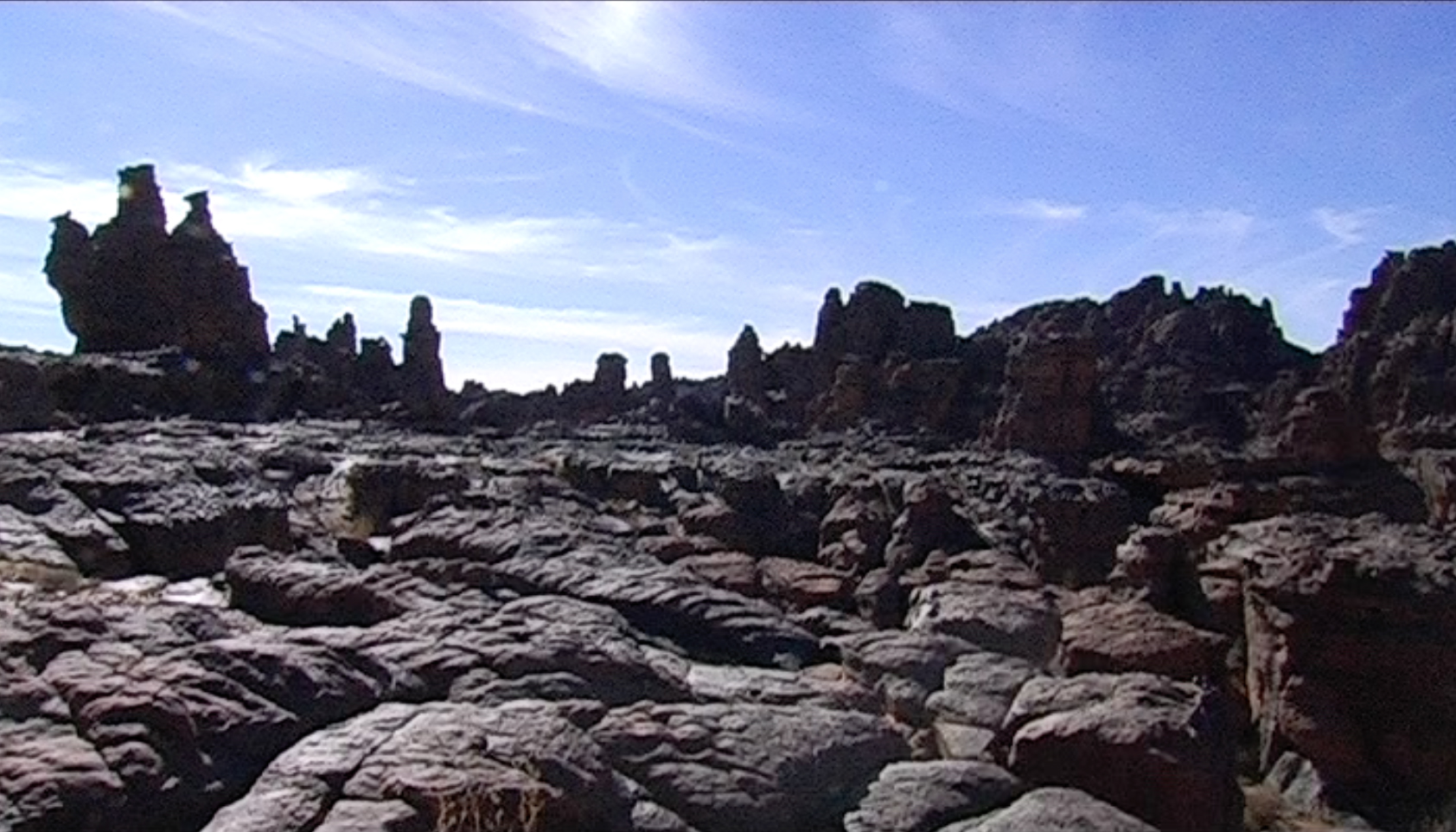 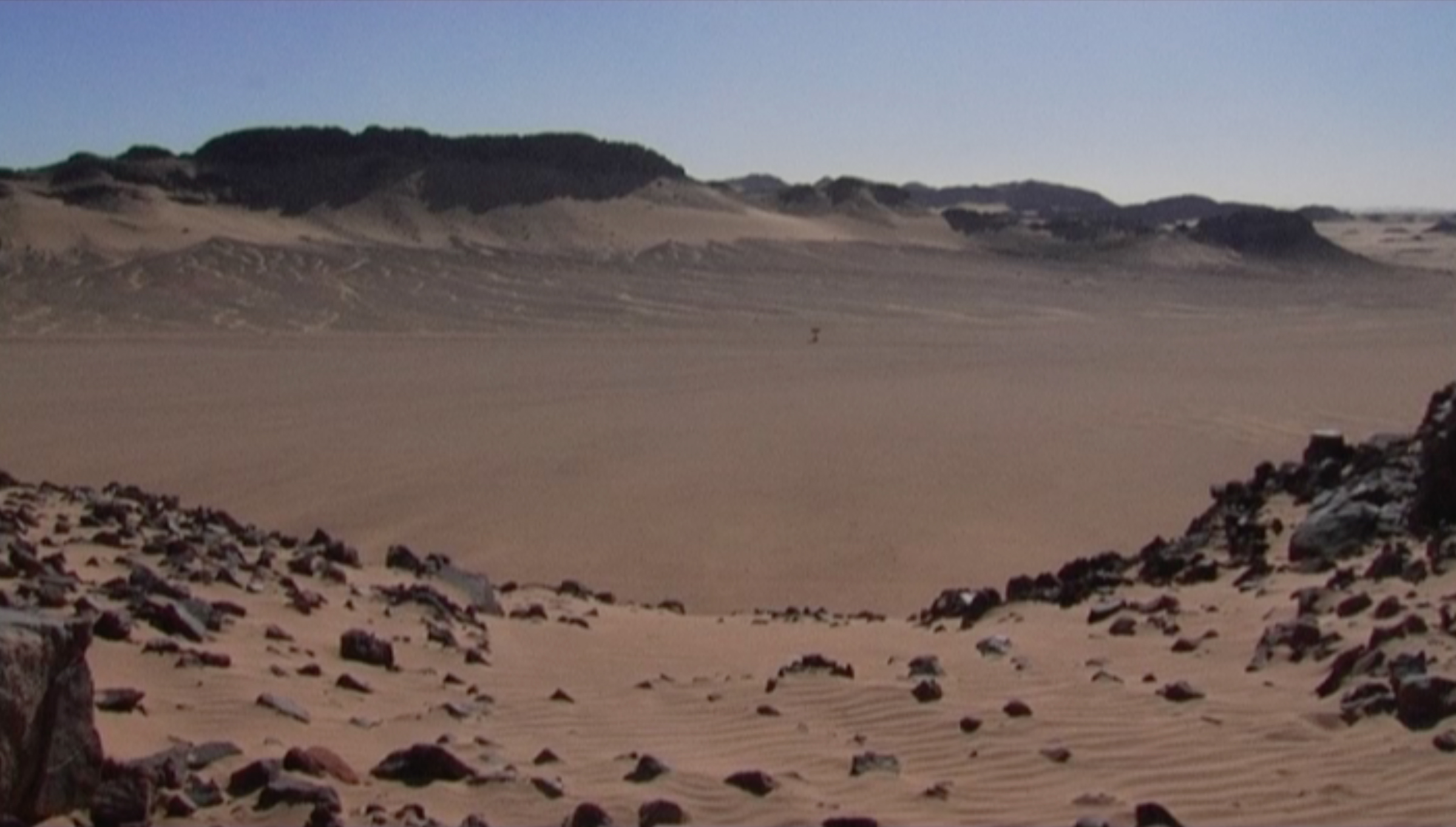 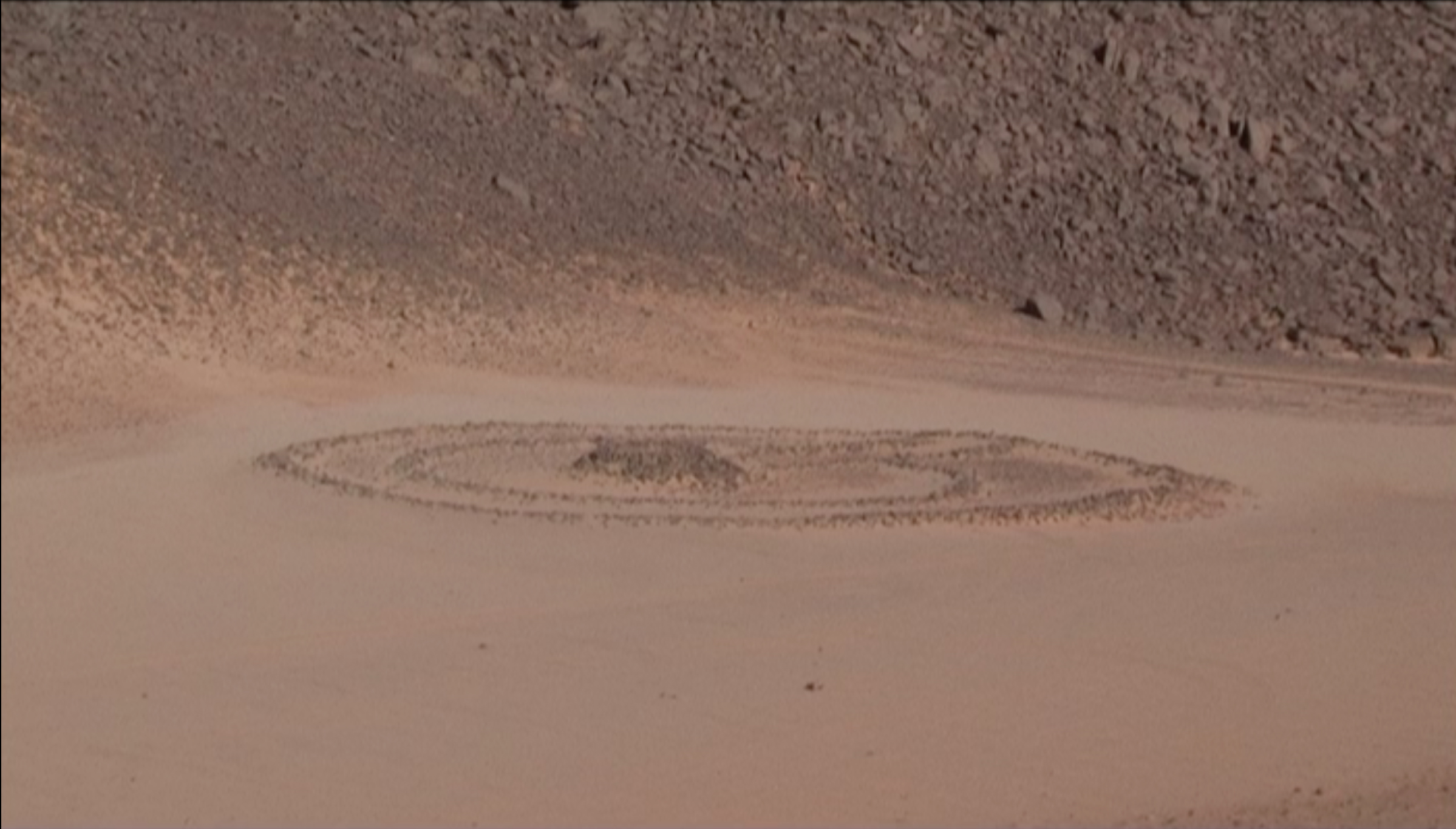 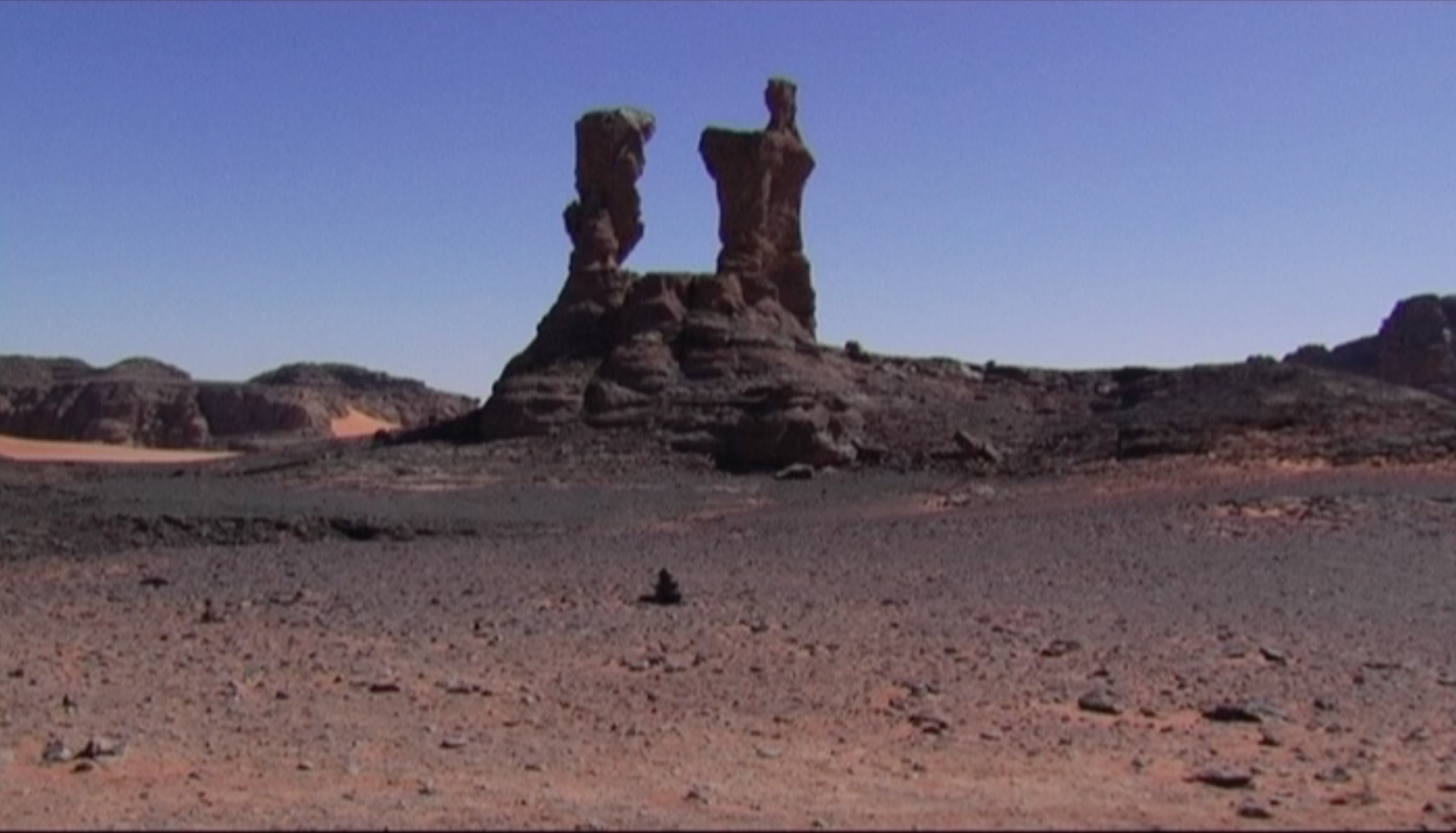 What she heard was the loud voicelessness of all that had passed through there. The cave paintings told the story of how the plateau was once full of people and lush with green. She learned that the area had once been a route for trade between Algeria and Niger, where fathers would sell their sons for the price of three kilos of salt—as the story goes. Today, people go there with metal detectors and search the sand for lost gold. Tassili N’Ajjer is also home to the Tuareg people, who inherited the knowledge of how to handle its harsh conditions. Ourahmane took a photograph of a Cyprus tree that somehow survives it all.

She embeds her experience into the gallery walls. Inspired by the marks still visible on the rocks after thousands of years—ones made by bodies who have defied being forgotten—she etches into the building, tagging a surface behind the gallery walls, and leaves behind a sign that will outlast the exhibition’s presence, like an echo. She installs transducer speakers (usually used for sound therapy) inside another wall, and her sub-decibel recordings of the desert make it vibrate with thousands of years of silence. Because one way to transmit the impossible scale of the desert—and the impossible scale of faith, belief, or the miraculous—is to give weight to its emptiness, to thicken its absences. The beat becomes the buzz, Fred tells Wu.

Bzzzz. Bzzzz. Bzzzz. I had set it to vibrate-only. A last one: https://www.youtube.com/watch?v=gQvcGVhJ334, a lecture by Hypatia Vourloumis in Amsterdam — We synchronize our tempos to find a rhythm through which the urge to live is expressed collectively. In this way, we set the world in motion, where poets can become the timekeepers of revolution.

Listening impacts the body. It implicates and enlists the body. Without being mediated by language, logic, or anything else, it touches the body and makes it move. As visitors to this exhibition, we vibrate together, like a chorus of instruments. Sounds and silences become pressure points, in a choreography of repetitions, for bodies to come up against the potential for something unintelligible.

Lydia Ourahmane (b. 1992, Saïda, Algeria) lives and works in Algiers. She received her B.F.A. from Goldsmiths, University of London in 2014 and has exhibited her work in group exhibitions such as Manifesta 12 (Palermo, Italy, 2018), Songs for Sabotage, the New Museum Triennial (New York, 2018), and the 15th Istanbul Biennial (2017), among others. Chisenhale presented her solo show The you in us in 2018. CCA Wattis Institute's exhibition is the first solo museum exhibition of her work in the United States.