On Ken Lum: What's old is old for a dog.
by Kim Nguyen 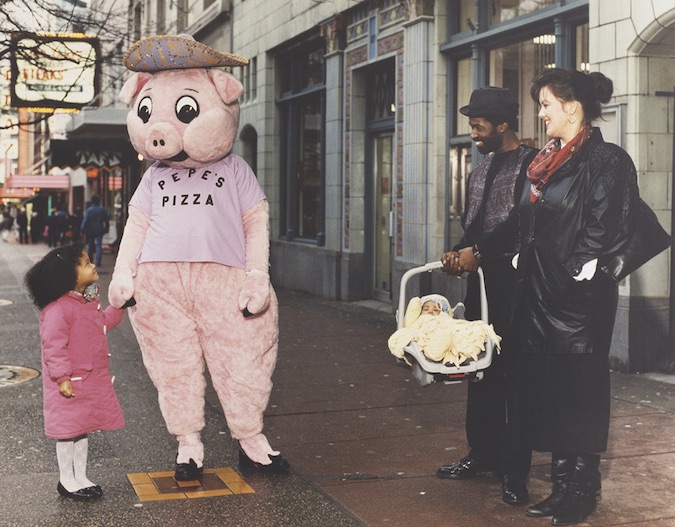 1.
It would be five years after he arrived in New York, the first time. Six years after graduation from Simon Fraser University, and the end of his pestology career. He was born thirty years before, on the day right after his parents arrived by boat to Canada, which was forty-eight years after his grandfather left China to work as a labourer for the Canadian Pacific Railway Company. Before New York the second time, there would be art classes at New York University, which included witnessing an intense, provocative performance by Vito Acconci and a 19th-century art class with Robert Rosenblum. This was alongside the cockroach-infested apartment in Brooklyn and the many hours spent in the dying days of Max’s Kansas City. It would be four years after family illness and a scarcity of funds brought him home. One year after his second graduation. And two years after his mother died.

1986 would also bring his first solo exhibition in New York at Gallery Nature Morte, an artist-run space founded by Peter Nagy and Alan Belcher that operated for six years in the East Village in the 80s. At the time, his grandmother was living in Brooklyn, having come to New York from China in the early 1960s. She had lived in the Lower East Side with her family of six, in a cramped one-bedroom apartment in a run-down tenement building, before moving to an outer borough. Many of the circumstances that would cause him to leave were the reasons she would always have to stay. For her, the city was comprised only of her place of home and her place of work. He would visit her, on this second time, and tell her about his show.

Similar to his other relatives in the city, his grandmother worked in a sweatshop in Chinatown, sewing garments. He recounts going to the shop as a boy, remembering that the air was so thick with lint it made it impossible to breathe without a mask. The noisy, industrial-electric fans provided a modest reprieve from the intense heat and humidity. In cluttered quarters, young women worked with babies strapped to their backs, while toddlers stood patiently in wait for their mothers to complete their shifts. Jay Mazur, then the secretary-treasurer of the International Ladies’ Garment Workers’ Union, proclaimed sweatshops were “the shame of the 1980s in this state, and in many parts of this country.”

On the night of his opening, he was startled by a surprise visit from his grandmother. Knowing not a word of English, she had navigated herself to the East Village from Chinatown by showing the invitation card to strangers, following their directions until she arrived at the gallery. Upon entering, she began calling out his name in Cantonese, generating a small crowd around her that was curious about her presence at the event. Was he hallucinating her voice? Stopping mid-conversation, he stood in a state of disbelief, as attendees parted so she could approach. She was dressed in what he described as poor Cantonese attire, invitation in hand. She peered at him and asked repeatedly in her native tongue, What is all this? Who are all these people?

He stood speechless and mortified. His tenderness toward her only heightened his feeling of exposure. To know her was to know another him. My family. My class. My race. My private self, as opposed to my public self. My non-artist self, as opposed to my artist self. They had been made painfully visible to me, and for all to see. They stand next to each other, and she asks again. Who are all these people? 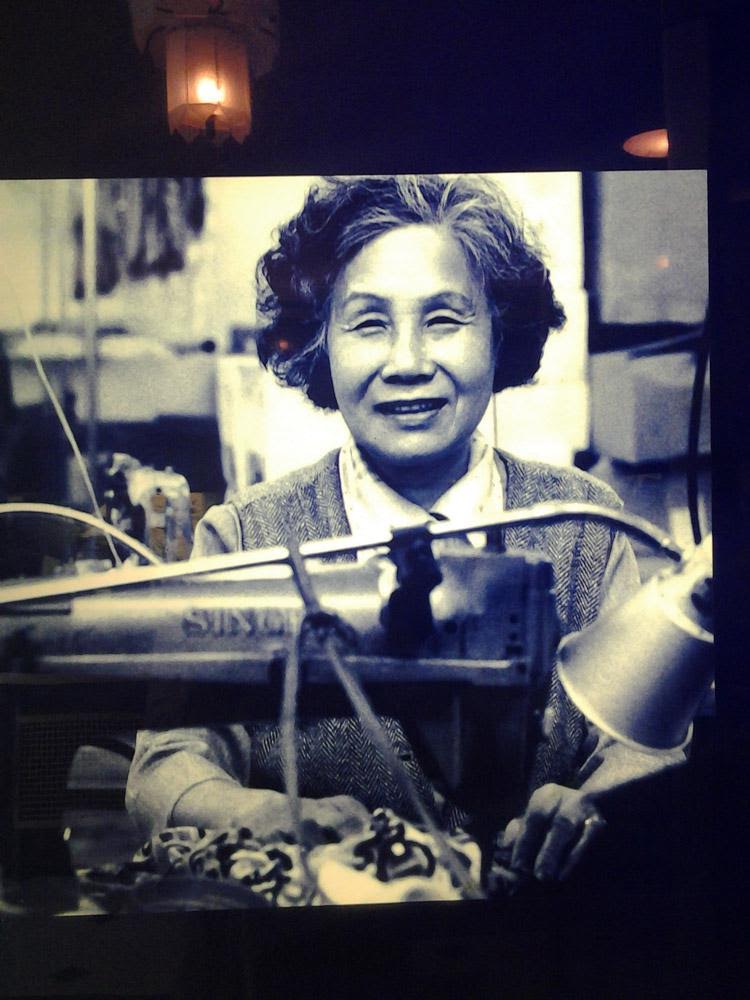 2.
There are rules. There always have been. There are rules that determine the parameters of what is enough and what isn’t. There are rules that say who is allowed inside that are different from the rules that define who gets to stay. It is still, thirty-two years later, foolish to believe that admission, acceptance, and success in the art world are detached from race, class, and gender. It remains disappointing that this realization does nothing to mitigate the demoralizing effects of living with this knowledge, or the constant anxiety that comes with adhering to the endless social rules and economic expectations once inside.

Yet somehow, for many of us, it is better to be of this place, than on the outskirts of it. And choosing to be of this place is also choosing a life of fraudulence—a perpetual performance of class tourism and privilege that further divides art from the real, while distancing us from the more fraught and messy parts of ourselves. The parts that are cognizant of the fact that the middle class is stretchy and undefined only to those within it, or that the experiences that make us fraught and messy have no currency if we do not have the power to articulate them. 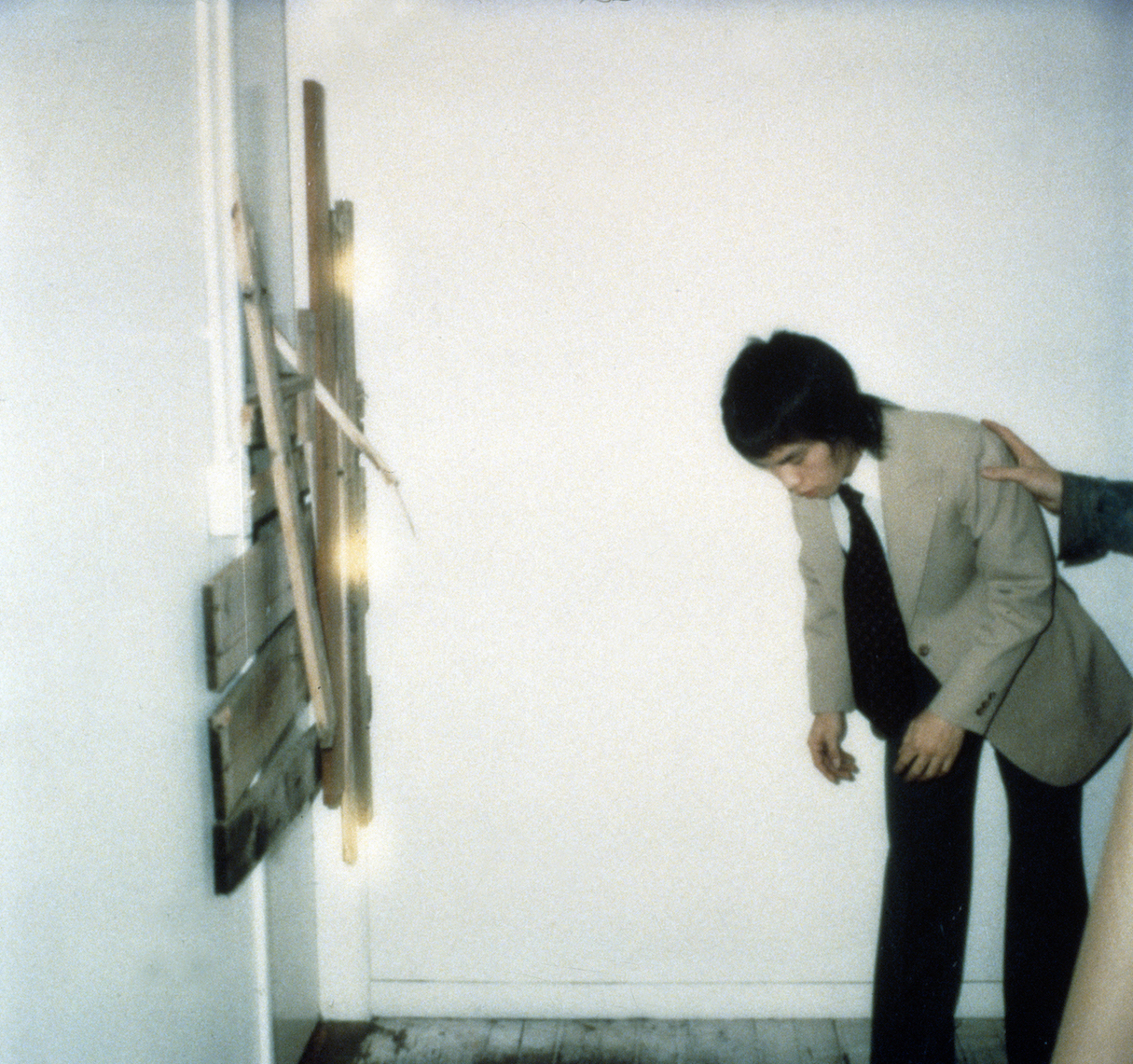 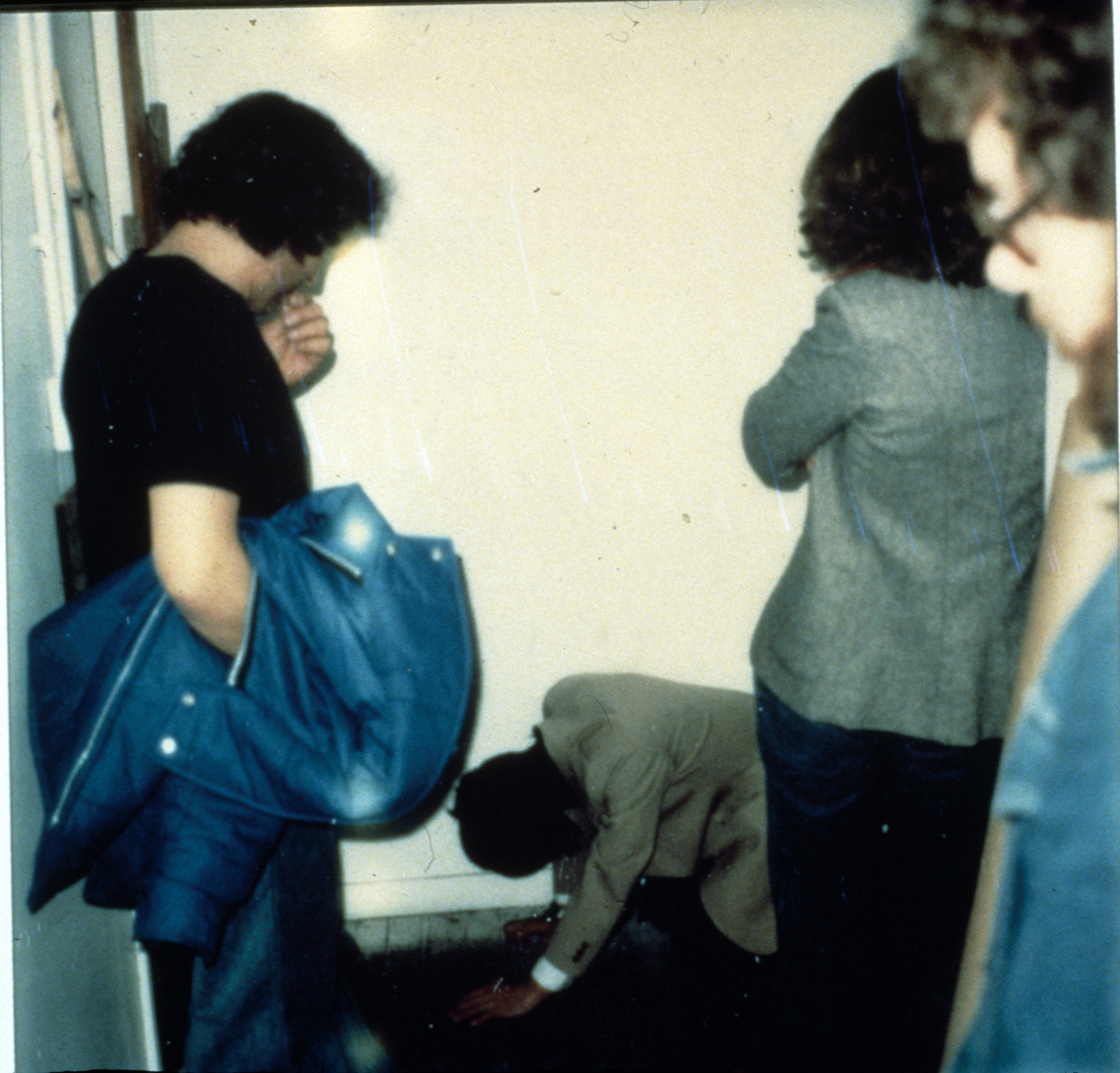 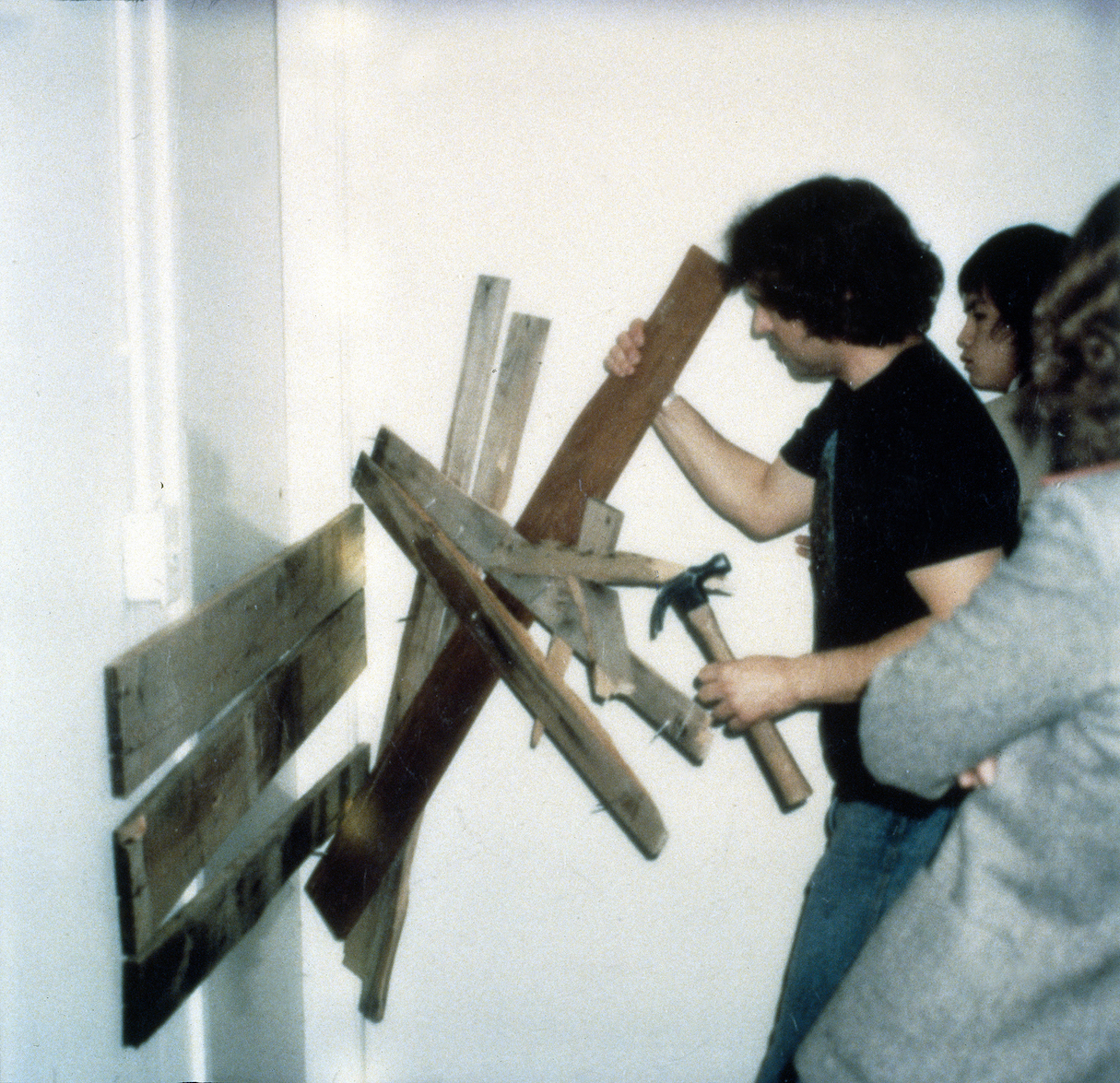 But what happens when the real seeps through? When it weaves through the streets, and arrives at your front step, invitation in hand? That line between the fraudulent you and the non-fraudulent you becomes more tenuous when a fundamental piece of your identity forces itself in. And what if you don’t stop it? You let the personal hemorrhage into the public, like a cavalcade of uncertainty around domestic ideals and the limitations of ambition, the albatrosses of class affiliation and racial identity, and the insecurities of your childhood and the weight of parental expectations. There is no shortage of the real when presenting the many conflicting moments that compose both versions of yourself. What’s pushed out the door comes back through the window.1

A space that inhabits both your shame and your relief is not one of reconciliation. It is, somehow, one that is equal parts affirmation and contradiction, real and imagined. It is how you can be alienated by labour while gathering self-worth from your competence. Or being embarrassed in private about being proud in public. Within this space, it is possible to be a person that offers empathy while being subsumed with incredulity, or to believe in a system that nurtures us, while losing faith in the very system that holds it together. You can be imbued with dignity but die anyway. Here, you can make a perfect home in which no one is permitted inside, or entice the wayward by declaring your family broken. You can be the lone child survivor of a police bombing—a goddamn miracle—only to be bested by a hot tub on a cruise ship. 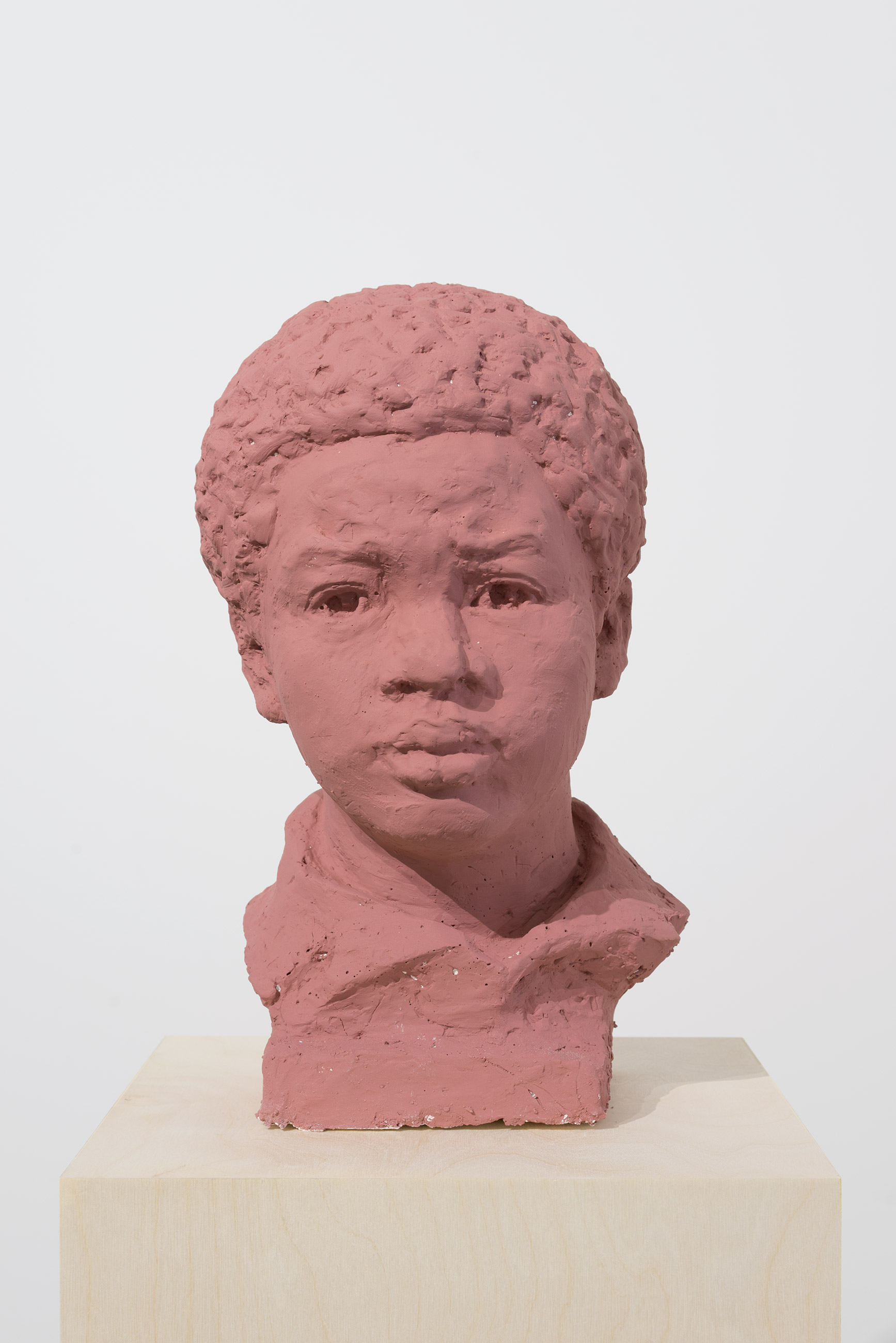 3.
Legibility of these things is determined by the real (the inside matters as much as the outside). As the story goes, he grew up in East Vancouver, a working-class neighbourhood largely populated by Chinese, Italian, Greek, and Japanese immigrant families, in a home on one of Vancouver’s oldest row-house blocks. The spectre of poverty hung over their household—his mother worked in a sweatshop and his father took on a number of menial jobs, while his grandparents toiled on farms outside of the city. He would even help his mother in the strawberry fields in the summer months, starting at the age of six. It was difficult enough to be a visible minority, but a poor one at that left little room for conceiving of a better lot. 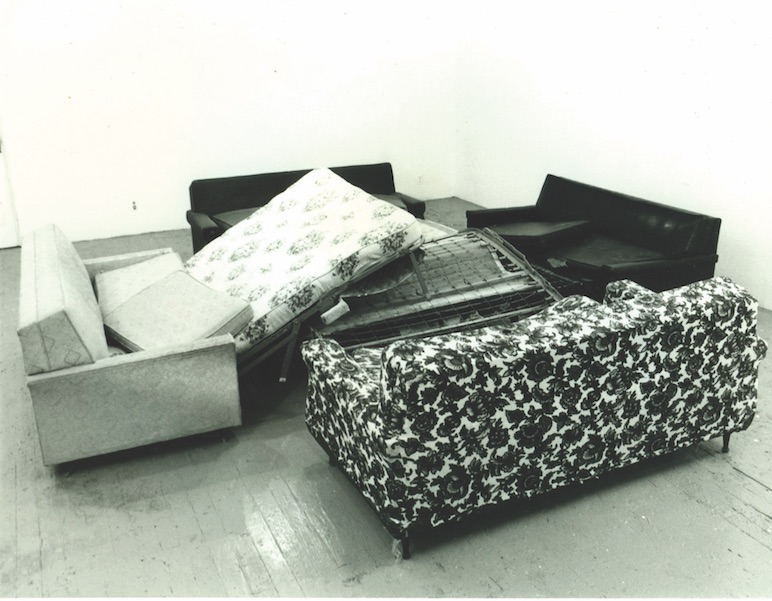 One of his childhood pastimes was to imagine ways to “improve” the family home, taking inspiration from the numerous home-furnishing flyers and catalogues that would be delivered outside their door. He envisioned himself in the showroom compositions, as if kindred with those people. His favourites were living rooms with matching loveseats that faced one another, flanking a fireplace. There were two fictions at work—the first that these depictions were real, and the second that these were homes his family could someday afford.

Many years later, one year after New York (the first time), he would compose an installation of rented furniture involving a set of bright orange lamps and a boldly patterned brown and orange sofa arrangement. To his surprise, people laughed at its tackiness. He had chosen things, in earnest, based on what he felt his mother would have loved. Many, many years later, long after he left New York (the second time), he would relay this story at an artist talk at a notable American institution. At the dinner afterward, a prominent white curator questioned his sincerity, implying he deceived the audience by liking something that would be universally understood as “ugly.”

The real infects us all, in different ways.

Consider this space as one in which the collision between art and the real is both abrupt and seamless. It is a space in which plausibility does not equate to resolution. Being convinced by what we see and what is being said does not solve the disjuncture between what we are being told and what we conjure. In the same way that we do not know any of these people, we recognize them. We can identify images of labour, loss, and value as racialized and gendered, while being simultaneously overwhelmed by a subject’s extreme ordinariness and banality. We can be struck by the sentimentality of a boy mentally transposing himself into home-furnishing flyers to imagine a better, unobtainable, life, while feeling discomfited by, and guilty of, exclusion. The agitation is intentional.

My grandmother did not know anything about the art world, nor even what contemporary art could be. And yet, there she was.

A child sees a fantasy, and we see her meeting an ambivalent pig. 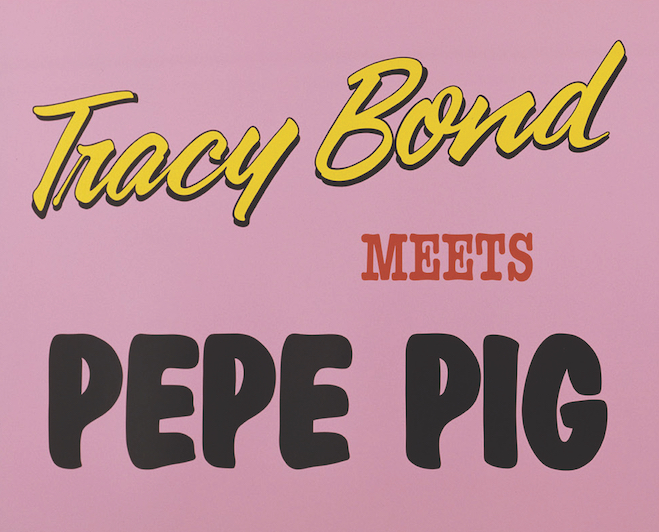 Notes:
(1) Hat tip to Marina Roy for this perfect turn of phrase.

Ken Lum (b. 1956, Vancouver) lives and works in Philadelphia. Lum has exhibited widely since the late 1970s, including solo exhibitions at the National Gallery of Canada, Witte de With, and the Vancouver Art Gallery, which presented a major retrospective of his work in 2011. His work has been included in the 2014 Whitney Biennial, the 2008 Gwangju Biennale, the 2007 Istanbul Biennial, Documenta XI and the 1995 and 2001 Venice Biennales. He has also realized permanent public art commissions for the cities of Vienna, Vancouver, Utrecht, Leiden, and St. Moritz, among others. He is co-founder and founding editor of the Yishu Journal of Contemporary Chinese Art. A longtime professor, he is currently the Chair of Fine Arts at the University of Pennsylvania’s School of Design in Philadelphia. A book of his writings will be published by Concordia University Press in 2018.