On K.r.m. Mooney: En, Set
by Anthony Huberman
Be careful where you walk — parts grow out of other parts, shapes reach out and spread toward other shapes, objects are tuned to other objects, and substances appear and reappear like weeds. Most of these works are made of metal, but they contain an agency usually reserved for sentient beings, prodding and sensing their environment the way a bacterium might explore its host.

K.r.m. Mooney has titled this exhibition En, Set. Strictly speaking, an en-set is a pneumatic tool used in engraving and stone setting. More loosely, “en” is a prefix — a fragment that can lodge itself inside of other words and move them around with altered or adjusted meanings: encircle, engage, encompass, entrap, encase. Jewelers might use the second term, when they “set” a stone to situate it in a specific location within another material. As an exhibition title, En, Set announces a series of abstract attachments : a setting where material fragments will fit within each other and form something else. 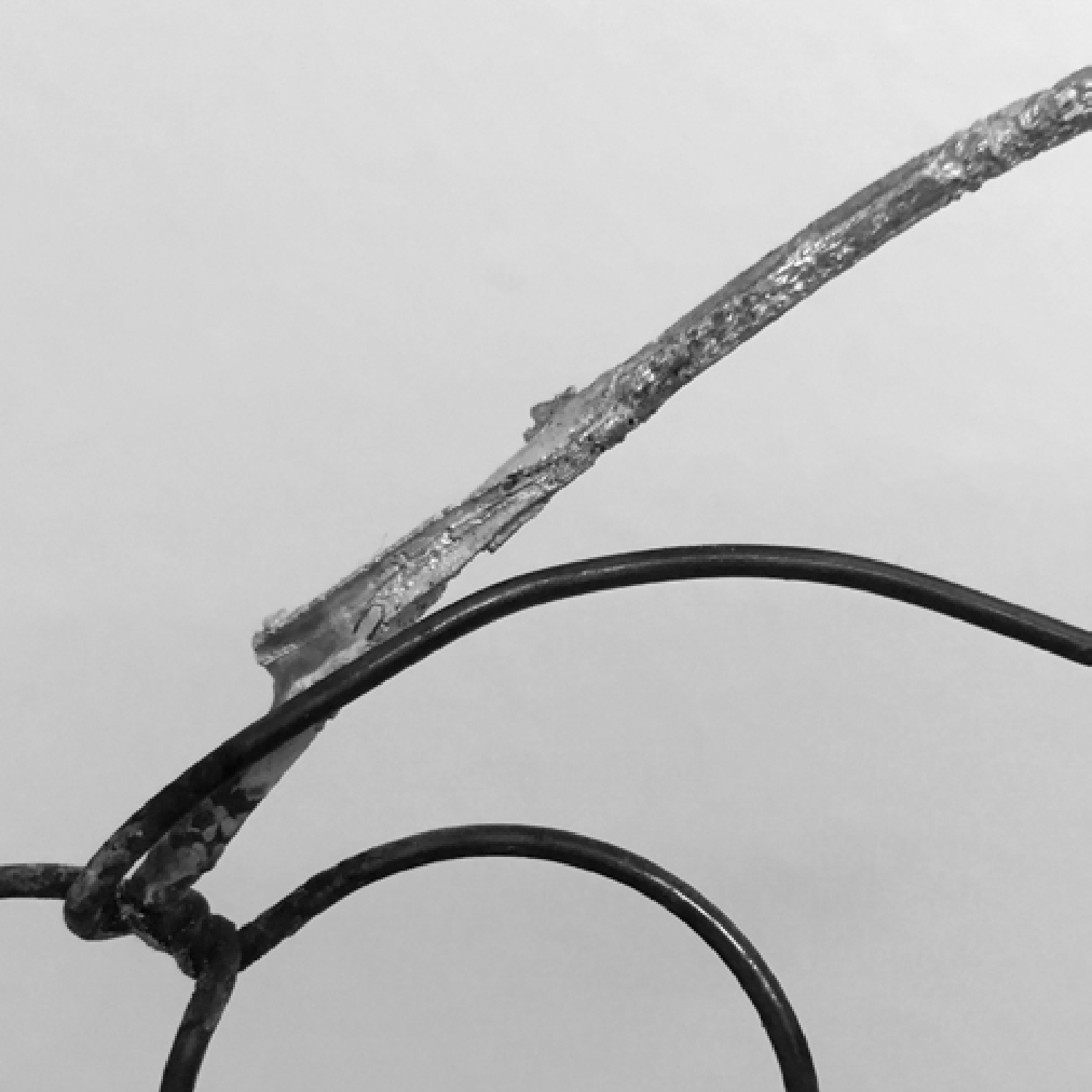 Proximity is messy. Separate elements, whether natural or cultural, just don’t quietly sit next to each other. Instead, they coalesce in a process of alignment, attachment, and migration, giving rise to emergent properties that exceed the sum of any parts. Regardless of what you might think, one plus one never equals two.

In quantum terms, this is known as entanglement, and in ontological terms, as difference, and it is the way we have come to describe the nature of all systems. It has complicated the mechanistic notion of cause-and-effect, since it inserts a fundamental contingency within the fabric of any relationship. In this sense, even machines don’t only do what we think they do, but are more like bodies or ecosystems — habitats where certain actions are possible and where materials infect and invade each other and their environment. The hard part lies is deciding where matter stops and where its environment begins.

K.r.m. Mooney points toward the porousness of those boundaries. More specifically, the artist is interested in what happens when objects, bodies, and spaces intersect: that place where bits of matter pass through, inside, around, and near each other, thereby becoming of each other.

In Mooney’s studio are several books by feminist theorist Karen Barad. “Bodies,” one underlined passage goes, “are not situated in the world, they are part of the world.” The distinction may seem subtle, but when it sinks in, it neutralizes any distance that separates humans from any animal, object, or subatomic particle that makes the world what it is — all are contaminated by the others.

Trained as a jeweler, Mooney imagines the way objects come into contact with bodies but considers questions a jeweler might not ask: Do steel, plants, floors, rhythms, circles, salt, minimalism, airflow, vulnerability, limbs, and foxtails all want something from each other? How do they impose on each other, but also belong together and even learn to coexist? The very notion of identity becomes impossible to track — all that’s left are possible actions, kinships, and affinities.

Take, for example, a piece of electrical conduit. It’s a classic postindustrial material: composed of repeating units of vinyl chloride (C2H3Cl), it forms a strong synthetic resin that is cheap and reliable. Then, say, loop some vinyl grafting ribbon around it, hook it onto a flat strip of steel, tie a silver-plated cast of a lavender branch to it, attach clarinet keys to it, and place it on a concrete floor. The resulting complex metal alloy is an expanded sense: a mixture of atoms that share enough properties to allow them to be brought together but that generate others that are unpredictable and normatively unintelligible.

Finally, insert it into a space (a.k.a.: light, heat, moisture, architecture, politics) and show it to an audience (a.k.a.: bodies, subjectivities, ideologies), which will trigger yet another series of potential transformations. By the end, that piece of electrical conduit will have crossed so many microscopic and macroscopic boundaries that it’s difficult to determine what it means to even call it a piece of electrical conduit in the first place.

Mooney calls this piece Collinear Flute (2015) and imagines it as the abstract and entangled offspring of an instrument and a tool. It appears alongside a range of other sculptures and architectural interventions. Taxis Commons (2015) inserts itself within the exhibition’s lighting fixtures: steel wire and plated bits of organic compounds are discreetly wrapped around fluorescent tubes, like organisms feeding off the stimulus of artificial light. Resembling fragile tentacles spreading outwards, Circadian Tackle (2015) and Circadian Tackle II (2015) are made of a series of steel cables and binding wire looped around silver-plated keychains, with fragments of organic compound casts and liver of sulfur, a material used by metalworkers to create patina. Parts of keys reappear elsewhere in Circadian Tackle III (2015), a disassembled electromagnetic lock, and in Architecture for Those of the Mud and of the Sky (2015), a high-performance pet door the artist has inset into a gallery wall and covered with a metal panel, with a silver-plated key fragment emerging from its lock. 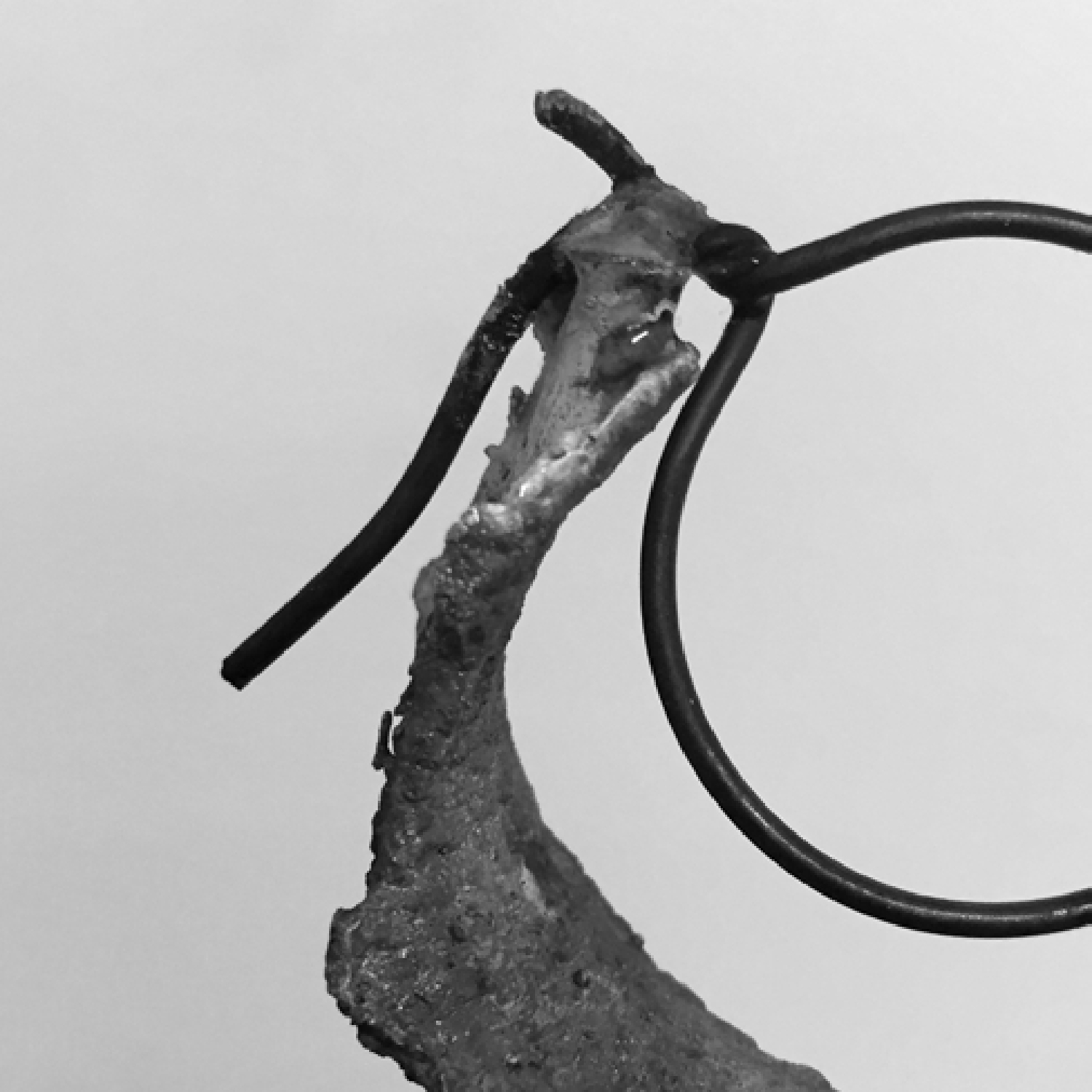 Tying many of these seemingly disparate elements is a materialization of entrance- and exit-points — different types of contact zones and throughways between materials. Keys, locks, and doors are the most literal examples, but the same logic applies to the abstract ways different compounds move in and out of objects and architectural spaces. The works on view are here and elsewhere at the same time, their location not tied to a fixed position.

“Abstractions,” the philosopher Donna Haraway tells us, “are built in order to be able to break down so that richer and more responsive invention, speculation, and proposing — worlding — can go on.” Mooney feeds and cares for abstractions, while making sure all of them stay in a suspended state and are fragile enough to dissolve.

These artworks are small, slow, and spread out. They are installed either below our knees or above our heads, and they organize the bodies of their viewers the way a mug organizes a hand. But more than anything, these artworks are like sleeper cells: dormant but always alert in their capacity to act. 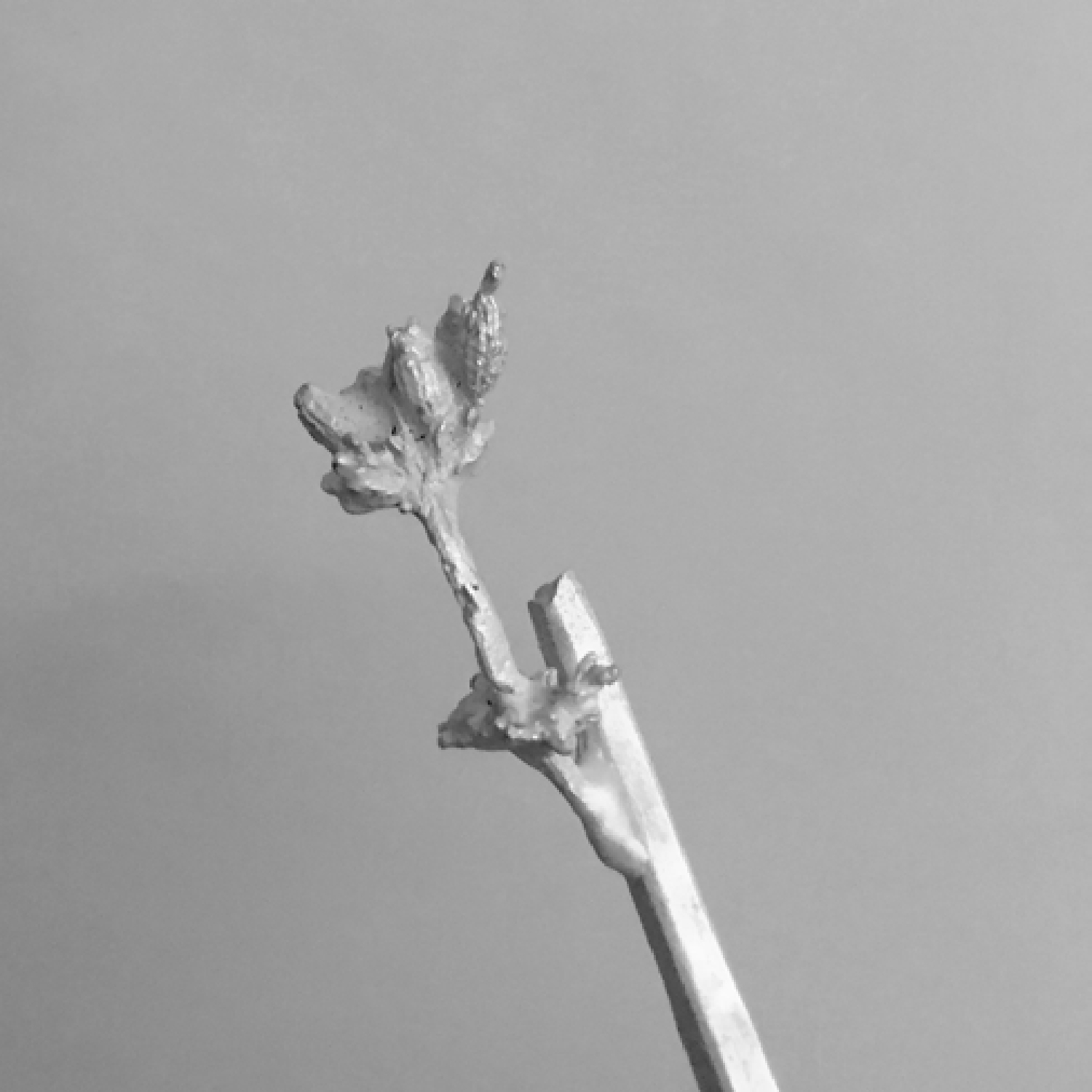 K.r.m. Mooney: En, Set is on view at CCA Wattis Institute for Contemporary Arts, in San Francisco, from June 25 to August 1, 2015. It is curated by Anthony Huberman, Director and Chief Curator at CCAWattis Institute.