On Candy Jernigan: A Couple of Pencils and Some Paper
by Anthony Huberman 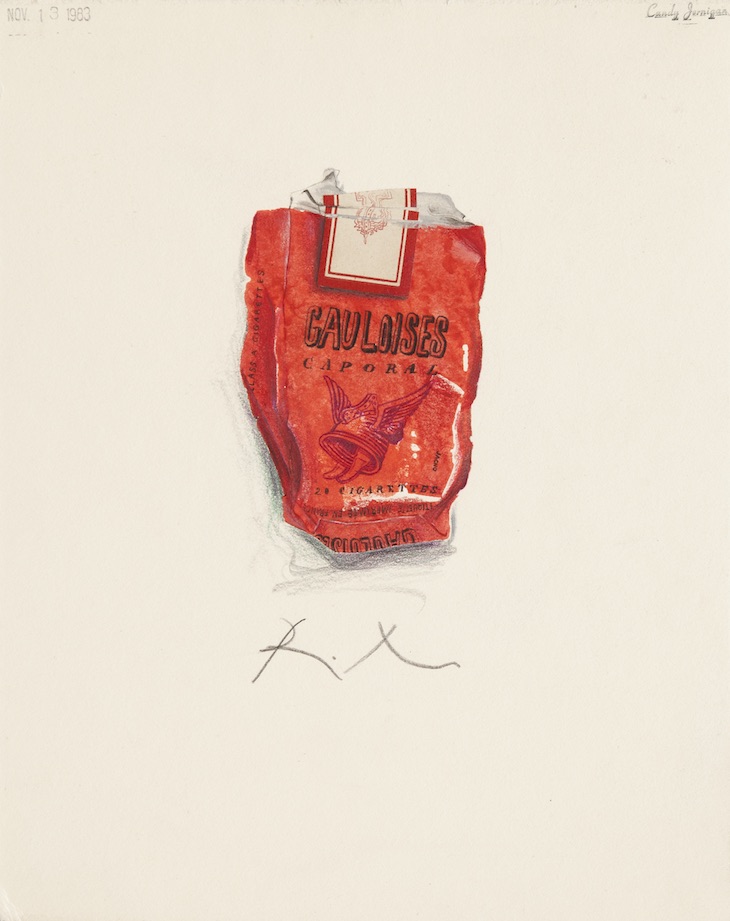 Evidence is often far from evident. Only after a careful (and obsessive) process of observing, collecting, and cataloguing does an object that seems to be inconsequential turn out to be far from it.

When applied to a context, evidence goes from being an object to being proof—a crumpled receipt or a clipped toenail takes on the added property of being an affirmation or a confirmation of a broader state of affairs. That cigarette butt must have belonged to a cigarette, which was probably smoked not too far away, not too long ago, by someone who smokes that brand. And whoever picks it up from the ground has proof that she, too, was there.

Candy Jernigan picked all sorts of things up from the ground. Her work tells the story of a life spent turning details into evidence and, by extension, into poetic bits of social commentary. While she would often incorporate those objects in collages or attach them to the pages of her diaristic travel journals, she would also bring them back to her studio and draw them. As representations, they stop being physical evidence but become something closer to a diagram or a record.

Just as there is a difference between reading a word and pronouncing it, Jernigan’s drawings and works on paper imbue a (discarded or rejected) physical fact with a sense of empathy and dignity. 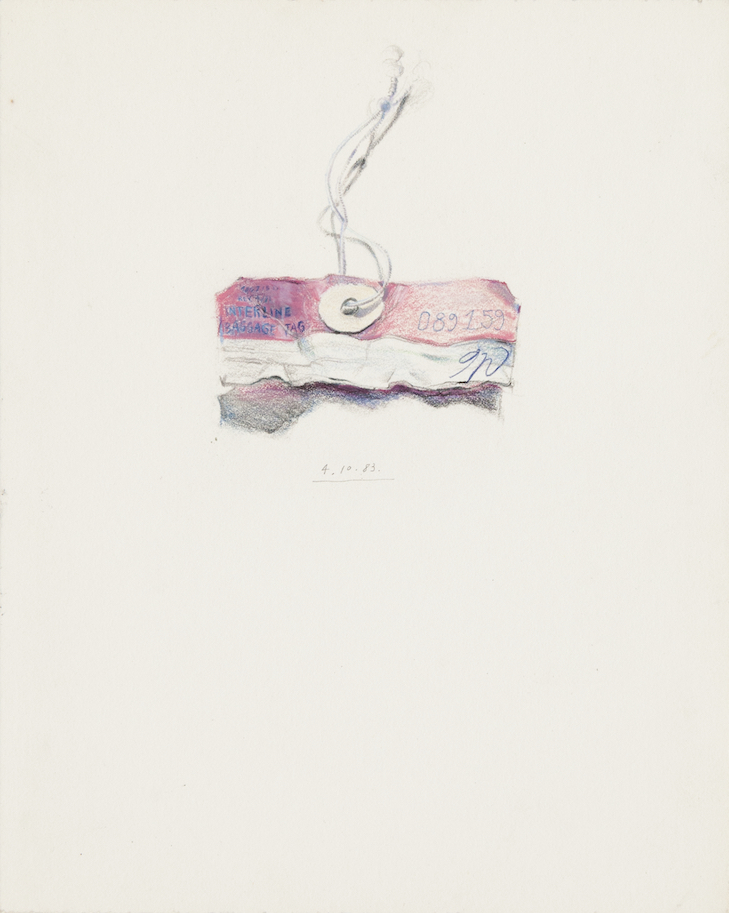 Evidence can come in all shapes and sizes, but Jernigan preferred the type she could pick up and put in her bag (and then, sometimes, in her freezer, a few inches away from dinner). She wasn’t interested in unique or precious “rare finds.” Instead, she was after the surplus, all that which is also already available in every corner store or on every other sidewalk. Bottles. Buttons. Luggage tags. Leaves. Bugs. Toilet paper. Cheez Doodles. She called them rejectamenta. 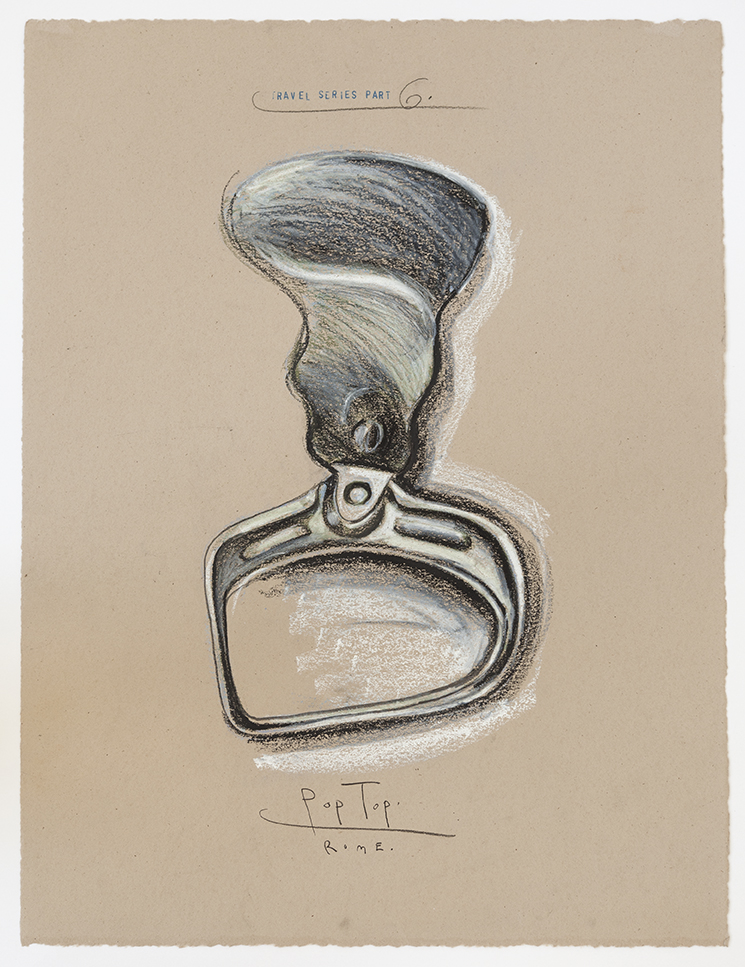 As a collector of evidence, Jernigan didn’t do any digging but simply picked up whatever the city coughed up on its own. She understood that a place keeps its secrets not in what it prizes but in what it rejects.

Her city was New York City—not the current one of Whole Foods and chai lattes, but the pre-gentrified East Village and Loisaida of tattoo parlors and drug addicts. Much of Jernigan’s evidence came from the few blocks near her apartment, but some also came from her trips to other places: Mexico, Brazil, Ecuador, India, Italy, France, Gambia, Mali, Texas, or Cape Breton. And yet, Jernigan’s drawings don’t depict those culturally specific mementos meant to document exotic travels; they show objects she could also have found on a sidewalk on the corner of 8th and Avenue A, on her way ...
..,
.,.
...
,..
,,.
...
,..
..,
... to the laundromat. In Rome, for example, she drew a series of pop-tops from aluminum cans. During a summer in Cape Breton came BUGS OF CAPE BRETON, Canada, August 83 (1983).

Objects are often meaningless until they have been placed in a particular order, and when they are, even junk looks less like junk. Haim Steinbach’s sculptures place storebought tchotchkes and appliances next to each other in sentence-like abstractions. Robert Rauschenberg’s combines place objects on top of each other in messy accumulations. Saul Steinberg’s maps place important destinations in the foreground and unimportant ones in the far background. 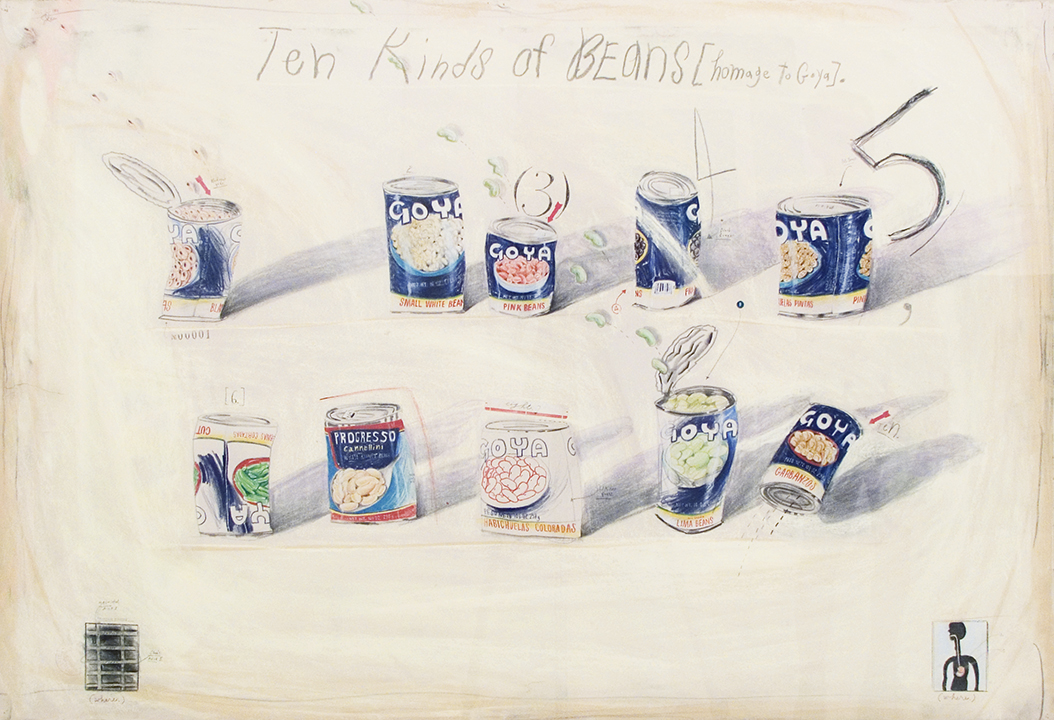 Candy Jernigan’s drawings treat common objects as though they are uncommon specimens that require charts and annotation. Underneath the ten cans of beans in THE NEW YORK COLLECTIONS, Ten Kinds of Beans (Homage to Goya) (1986) are two footnotes:

1. a city map showing where the cans came from (the city blocks, the food markets, and the aisles — aisle 3 and aisle 5)

2. and a drawing of a body, showing where the food ultimately ended up (the mouth, the esophagus, and the stomach). 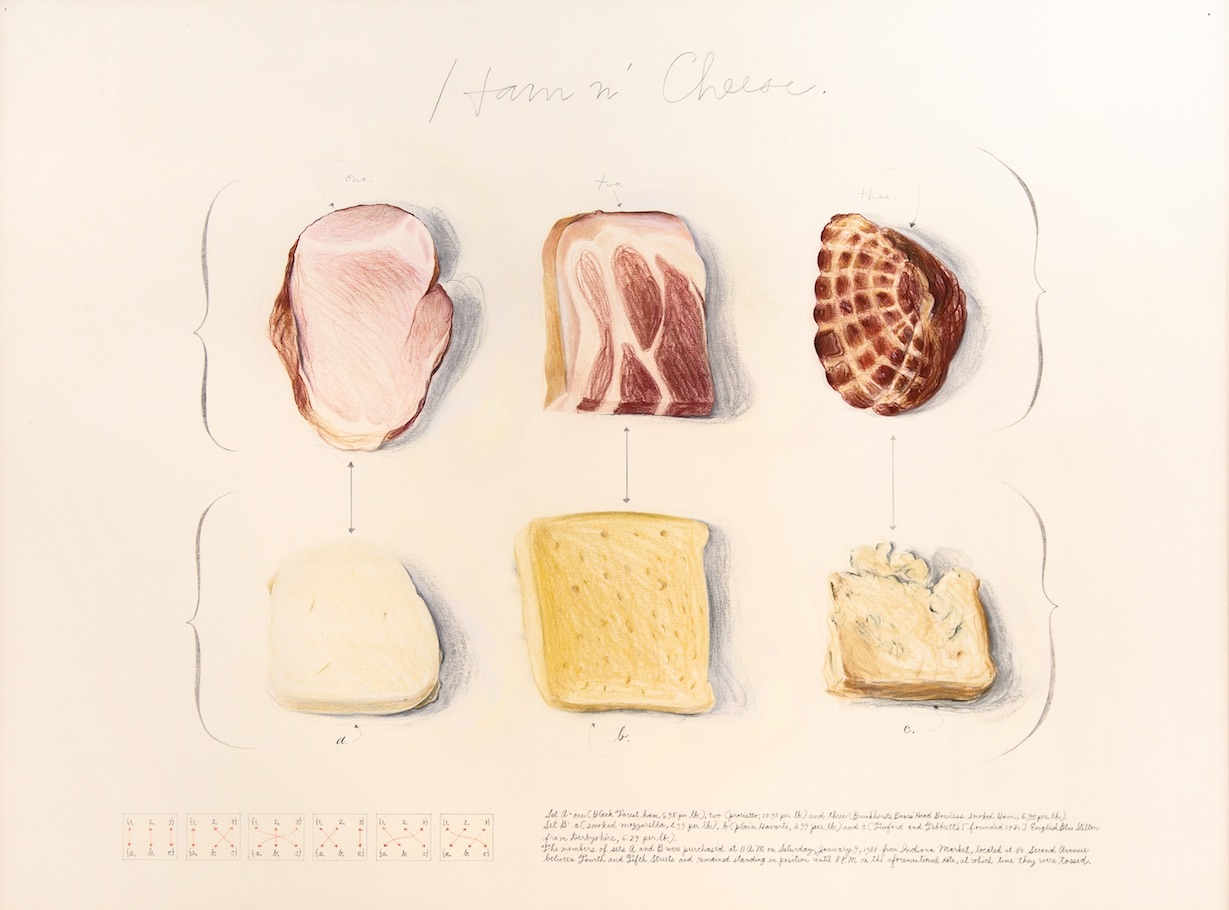 Jernigan was born in 1952 in Miami (Florida), went to Pratt (Brooklyn), worked as a set and costume designer in Provincetown (Cape Cod), and finally moved to New York in 1980, where she worked for Paul Bacon, a book and album cover designer. In 1981, on a flight from Amsterdam back to New York, she found herself sitting next to the composer Philip Glass. They got married and lived together for ten years, until she died of liver cancer. She was only 39.

During the last few weeks of her life, Jernigan worked late into the night on a series of watercolors. She would make five or six every night. She called them Vessels, and each features a single vessel—a vase, a cup, a bowl, or a pitcher—sometimes two. Each is set against a washed-out colored background, light blue, sky grey, sunset red, pale yellow, some with pulled-back curtains painted near the top two corners. The depth of field is at its bare minimum, often no more than a single line to imply a surface or a tabletop, with the object casting a slight forward shadow. They are haunting but also heartbreaking, fragile but also timeless, especially when considering her state of mind and health at the time. 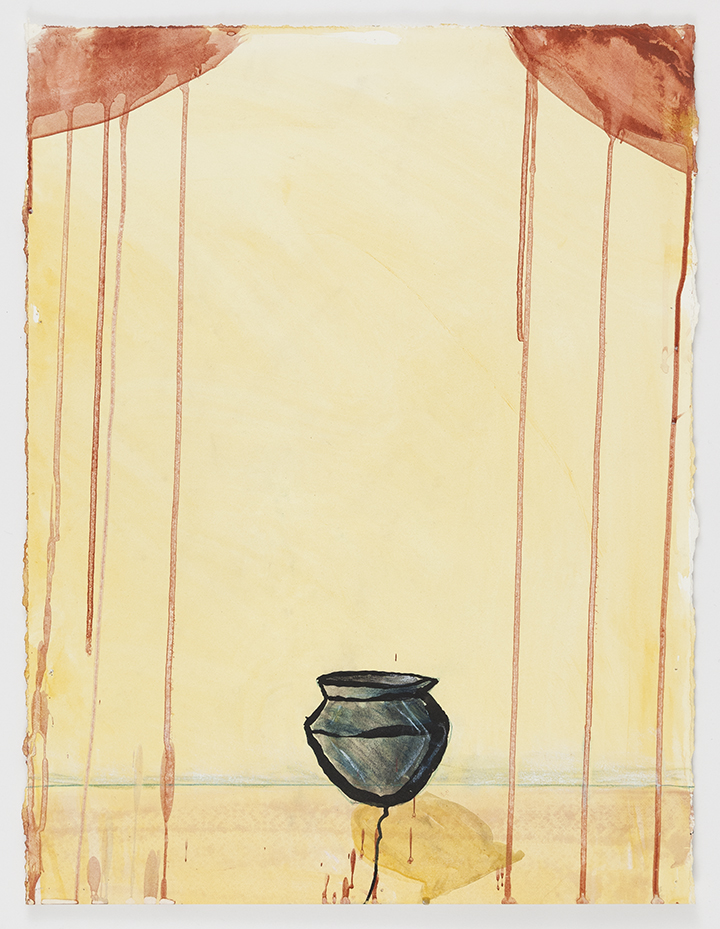