On Akosua Adoma Owusu: Welcome to the Jungle
by Kim Nguyen 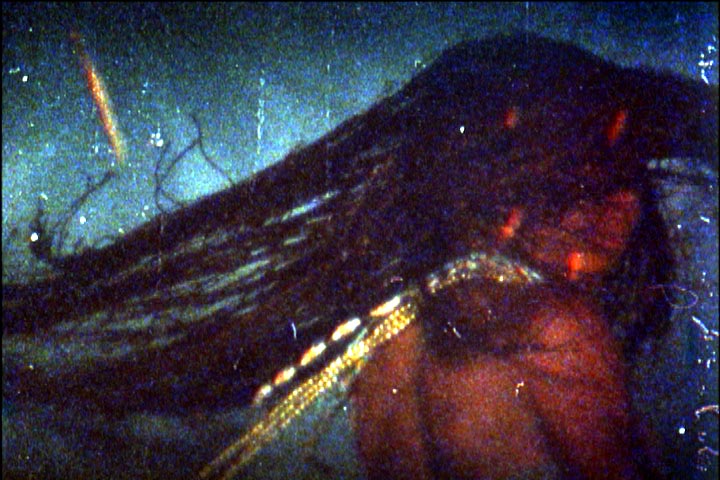 This land is your land, this land is my land
From California, well to the New York Island
From the Redwood Forest, to the Gulf Stream waters
I tell ya, this land was made for you and me


We begin with how it ends. The artist, spinning in slow motion, her face half-concealed from a long train of microbraids swirling around her head. Glowing beaded necklaces lift mid-air, surrounding her body like a tangle of lights or tracings of a coastline.

We hear a foreboding reharmonization of “Yankee Doodle,” a slow and ominous first pour into a gritty, bluesy glass by Sharon Jones & the Dap-Kings. Jones belts a soulful and insistent protest, “This land is your land, this land is my land… This land was made for you and me.” This land. It was made for you, and me.

We know the song is a remake of Woody Guthrie’s “This Land is Your Land”— which was written as a subversive response to Irving Berlin’s “God Bless America”—a Marxist anthem often misconstrued as a folksy campfire singa- long. Jones recorded her version in 2004 in the midst of the George W. Bush presidency, restoring verses redacted from the original to reclaim the song’s social justice origins. She sings of private property and wealth disparity and names cities, states, and neighborhoods with majority Black populations that have been erased from the portrait of this land.

We listen to her mournful declaration and we think of the many ways in which we are bound together, to no land, to your land, and to our land. How we can have one foot on this land and one foot on another (and maybe even another, or two lands over top of each other). How once there was a land made for you and me, and then there wasn’t.

We feel the urgency throughout her vocals. They demand a you follow through on promises made for freedom and for a right to a home. A fervent call for us to believe that those who live in this country are the ones who should determine its destiny.

We recall that at no point do we hear her utter the word our, and only once we. There is the invitational you and an invitational me, somehow both oppositional and complementary, but always split in two.

A land cracked in half.

Coined by sociologist and civil rights activist W.E.B. Du Bois in his powerful 1903 work The Souls of Black Folk, double consciousness is described as a “sense of always looking at one’s self through the eyes of others, of measuring one’s soul by the tape of a world that looks on in amused contempt and pity. One ever feels his twoness—an American, a Negro; two souls, two thoughts, two unreconciled strivings; two warring ideals in one dark body, whose dogged strength alone keeps it from being torn asunder.” It determines the experience of Black Americans negotiating selfhood in the face of discrimination and cultural location. An identity divided into multiple parts, with an impossibility for reconciliation (there is your land and then there is my land).

As a member of the first generation in her family to be born in the United States, Akosua Adoma Owusu speaks directly to the crisis of heritage and assimilation for African expatriates and their U.S.-born children in her work. She adds a third layer to Du Bois’s consciousness, expanding his definitions to reflect the diverse identities of African immigrants interacting in African, white American, and Black American culture. Although the internal pressures and external conflicts associated with double consciousness persist in Owusu’s third cinematic space, hers integrates what Du Bois excludes—feminism, queerness, and immigrant consciousnesses, and all their intersections. And it is in this in-between, amongst the archipelagoes, that she creates new meaning.

Owusu describes triple consciousness as experienced in: the necessary assimilation of the African diaspora to white American culture in order to succeed in American society; the frequent grouping of the African immigrant with Black Americans in the eyes of others, mostly due to a shared skin color; and the lack of connection of many Africans with African American culture and history, their distinct identities rendered marginal. Her films are materializations of this fragmentary space, where heterogeneity over singularity is currency. The work proposes that to be a we is to recognize a type of collectivity, or multiplicity in existence, one that can be simultaneously shared and fractured.

Combining documentary with personal narrative, Owusu’s films incorporate a diverse array of materials, including reenactments of folklore and scenes of daily life, animated textiles, archival and found footage, oral stories and semiautobiographical experiences, American pop culture and advertisements, and original 16mm and Super-8 film footage. These elements are mixed with a complex layering of sound and music that reflects her international perspective while delivering coded messages. I was wonderin’, if this land was made for you and me. The films overlap, crosscut, and splinter, doubling, tripling, and quadrupling their way into the contradictory and knotted terrains of globalization, transnational identities, and colonialism. 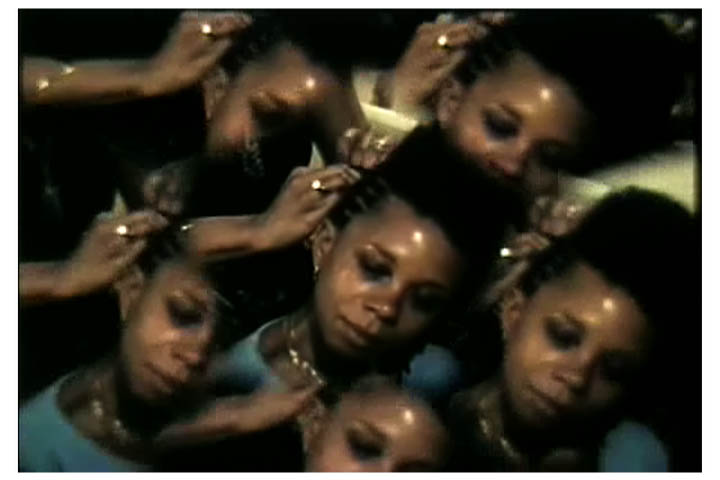 Owusu moves between imagined space and realism with an inherent ease, a nod to the avant-garde, experimental nature of Ghanaian films. Ghanaian filmmakers often traverse across genres, shifting from comedy to romance to horror in a single story, with no apparent allegiance to reality or formal narrative structure. Owusu adapts these strategies, using quick edits and unlikely juxtapositions to guide audiences through unsettling moments and to express the cultural anxieties surrounding her own racial legacy.

At the heart of many of her works is the fraught relationship between beauty and power. Black hair culture as an art form in postcolonial Ghana, colorism, and manifestations of racial capitalism in the beauty industry are frequent topics, as is the figure of the hairdresser and the subject of hairstyling. Of particular interest are the ways in which the ideology of beauty centers whiteness and functions as a hegemonic system of control. Owusu illustrates the Black trauma that is a consequence of white standards of beauty through a manipulation of film and a use of imagery and sound that seem incongruous—darkness can coexist with humor on this island, absolutely—while pointing to the absurdity of these power structures.

A lyrical portrait of hair salons in Kumasi, Ghana, Me Broni Ba (2009) depicts the tangled legacy of European colonialism in Africa through images of women practicing hair braiding on discarded white baby dolls from the West. Unfolding through a series of vignettes, the film is set against a child’s story of migrating from Ghana to the United States (we hear it is a cold land, with leafless trees and no bright lights, full of pink people with blonde hair). The film uncovers the meaning behind the Akan term of endearment, me broni ba, an expression that can be heard when a mother refers to her child, or even a husband to his wife, acknowledging their subject of adoration as me broni ba, or “my white baby.” Lest we forget, whiteness is a continent in which we all reside. 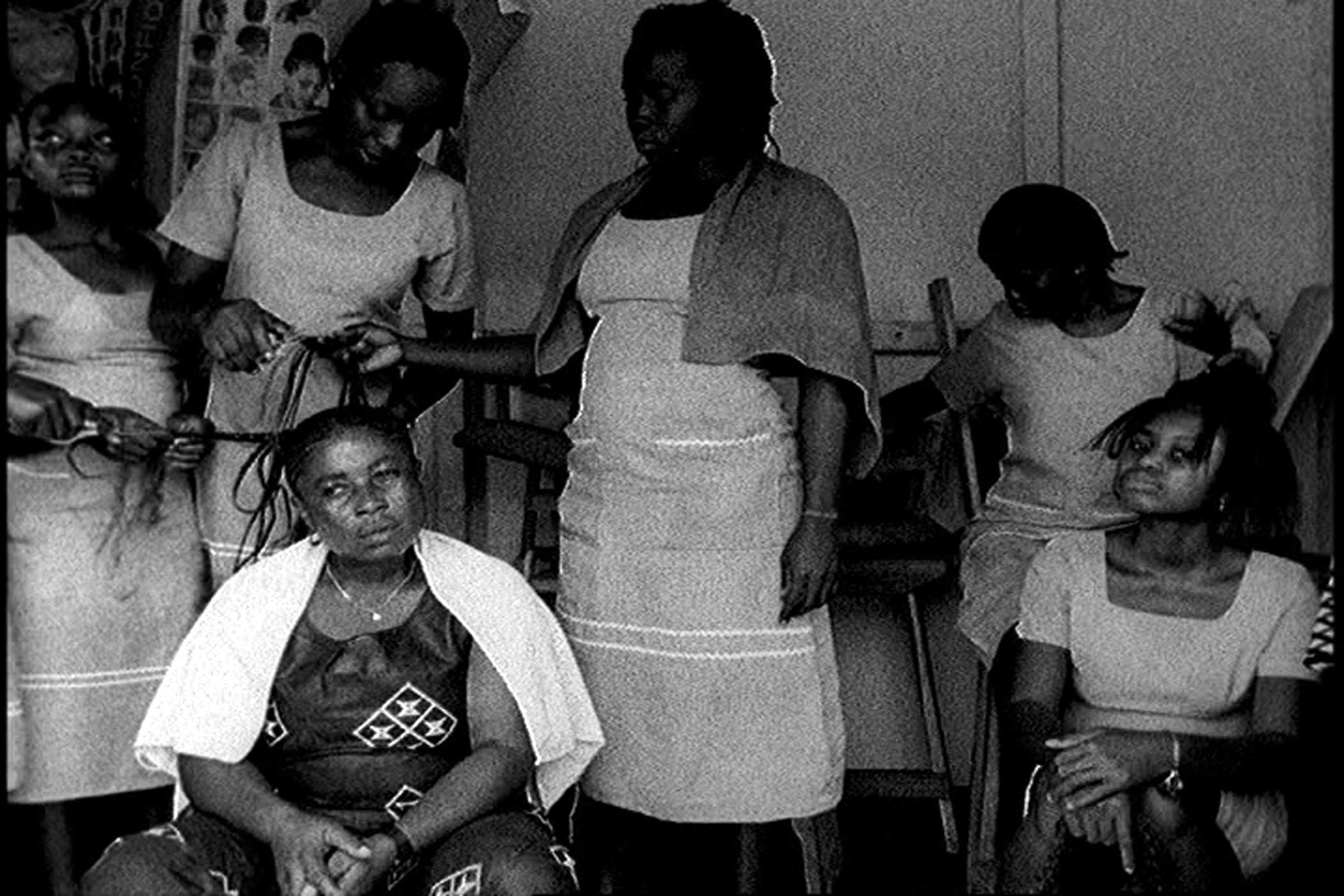 While Me Broni Ba is concentrated in Ghana, Split Ends, I Feel Wonderful (2012) investigates the uniqueness of hair culture in the U.S. Based on an ABC news report from the 1970s about Afro hair culture in New York City, Split Ends weaves together a dense collage of found footage that references Blaxploitation flicks and kaleidoscopic psychedelia. The film is spliced with voiceovers from colonial narratives, organic sounds from salon environments, and a protest speech on resistance by political activist, author, and academic Angela Davis (herself a hair icon of the civil rights era). Overlaid with a funktastic soundtrack, Owusu draws attention to both the inherent pride and specific displeasure and suffering associated with grooming Black hair that is all too familiar to the Black diaspora.

The final film in Owusu’s hair trilogy, White Afro (2019), employs an archival instructional video produced by the educational department of the Barbers, Beauticians, and Allied Industries Association on how to offer curly perms or body waving services to their white clientele, ostensibly for financial gain. The training video is intermingled with Owusu’s mother’s experience working as a hairstylist at a predominantly white hair salon called Fantastic Sams in Alexandria, Virginia. Offering a rare perspective on the Afro hairstyle—as an unmistakable marker of Black collective power that becomes a desirable, and appropriated, aesthetic during liberation movements—the film also expands on the abilities of non-Black beauticians and barbers to wield their shops as spaces for political change. 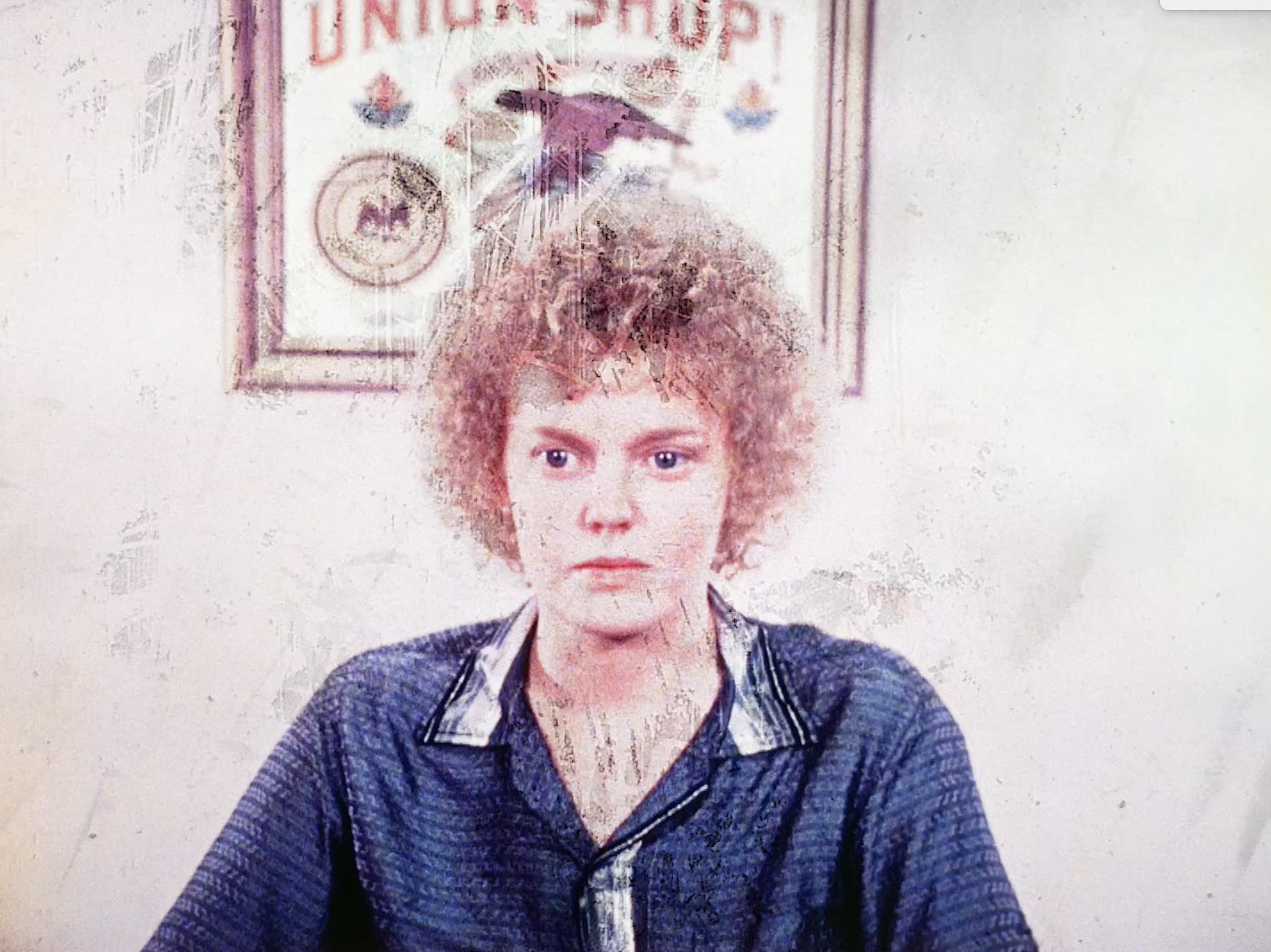 Pelourinho: They Don’t Really Care About Us (2019) opens with a letter from Du Bois to the U.S. Embassy of Brazil in 1927 concerning attitudes and discrimination towards Black American travelers, specifically a perceived policy of exclusion that discouraged their entry into the South American country. Pelourinho, the old historic centre of Salvador City, is the location of Owusu’s film as well as the site in which Spike Lee and Michael Jackson filmed Jackson’s controversial music video “They Don’t Care About Us” (1996). The vestiges of Jackson’s visit endure in the city, his likeness appearing in a number of bizarre, kitschy forms, such as an image of a young Jackson protectively holding a doll that resembles his post-plastic surgery adult self. The film implies, with melancholic irony, that there are sinister exceptions to exclusion, in which a Black person that aligns more closely with whiteness is not only granted permission and access, but can be a figure of everlasting celebration. 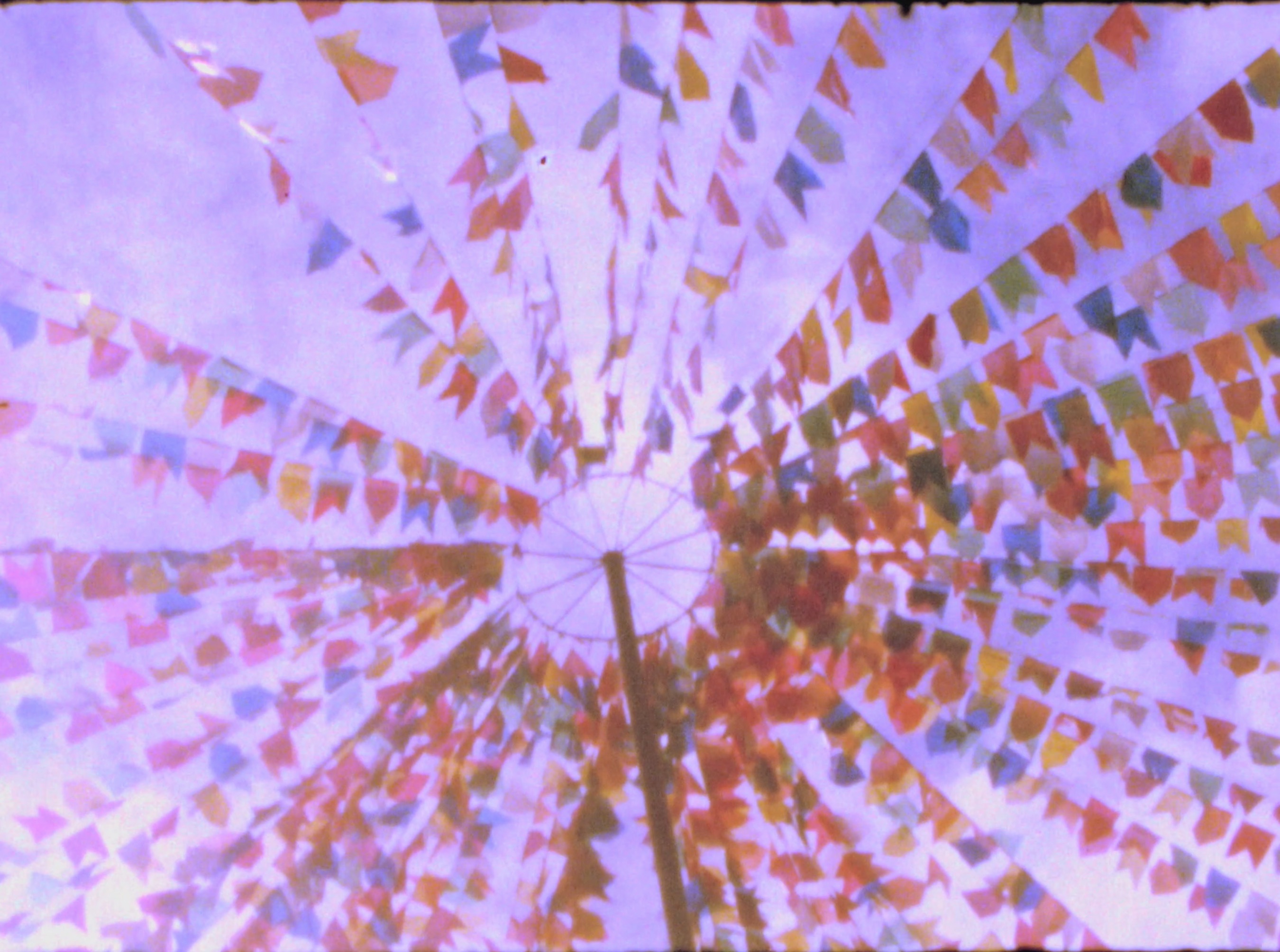 What cultural loss occurs, when the you and the me are split in two? Or three? Or four? How do we emerge from a constant weight of realizations, of being twice as good, of accepting half as much, of not being of here and too much of there? And how do these chasms transform into spaces of becoming? According to Owusu, Blackness is fundamentally entangled with loss, displacement, and memory; it is a manifold existence. At the root of what she identifies as her “warring consciousness” is the anxiety that she is too Ghanaian for America, and too American for Ghana. A life lived on two cracked halves, in constant search of a
land she can actually call her own.

The countries that I inhabit spread out like stars, in archipelagoes.

Akosua Adoma Owusu (b. 1984) is a Ghanaian-American filmmaker, producer, and cinematographer. Her films have screened internationally, including the International Film Festival Rotterdam, Locarno International Film Festival, Toronto International Film Festival, New Directors/New Films Festival and the BFI London Film Festival. Her work is included in the collections of the Whitney Museum, Centre Pompidou, the Fowler Museum at UCLA, and the Black Film Center/Archive at Indiana University Bloomington. She has received fellowships and grants from the John Simon Guggenheim Memorial Foundation, the Knight Foundation, Creative Capital, the MacDowell Colony, the Camargo Foundation, and most recently from the Residency Program of the Goethe-Institut Salvador-Bahia. She holds MFA degrees in Film & Video and Fine Art from California Institute of the Arts and a BA in Media Studies from the University of Virginia. Owusu divides her time between Ghana and New York, where she works as a visiting assistant professor at the Pratt Institute.